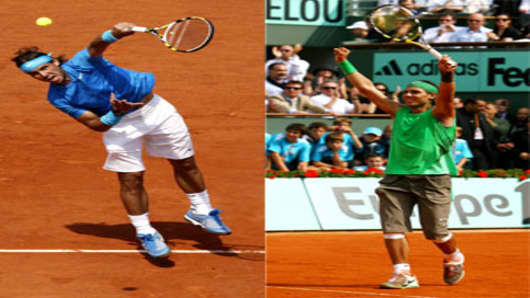 Two and half years ago, Nike made a drastic move by changing Rafael Nadal out of his trademark cut-off muscle T's and capri shorts and putting him into more conservative tennis attire.

They gave him sleeves and raised his shorts up about four inches. At the time, his fans were up in arms. How could big bad Nike do this?

Well, it actually made a whole lot of sense. Here's what I wrote in January 2009:

"You have the No. 1 tennis player in the world who is an incredible player, but he wears these cutoff shirts and extra long pants that almost no tennis player is going to wear. Not many people would wear that for fashion purposes, either. So Nike officials don't have any choice if they are going to make the money they pay Nadal work for them."

So now that Nadal has won yet another French Open, it's time to look back and see if Nike made the right decision.

"It was a great move," said Mark Mason of Mason's Tennis Mart in New York City. "We had some kids buying the capris, but most older guys aren't going to show up sleeveless to the country club. Nike understood that it was a limited market and they could only sell so much of it."

Back then, Mason said that he believed Nike thought that Nadal could be a trendsetter and change fashion on the court.

"It didn't turn out that way," Mason said. "It wasn't like Agassi, who wore denim shorts and got everyone to wear them too."

With the new outfits, Nike managed to do a much more robust business and tennis specialty retailers obviously appreciated that.

"The kids didn't like the capris," said Brad Blume, managing partner of Tennis Express, a retailer in Houston. "They thought that they were too restrictive. Now, Nadal's outfits appeal to the younger crowd because of the bright blue and lime green. The kids might match those outfits with the shoes of the same color. Older guys, in the 40s and 50s, won't buy the shoes and the shirt, but they'll at least buy the shirt."