A new government is in place in Portugal, tasked with tackling the problems facing one of the sick men of Europe. Unfortunately, new faces in government do not in any way change the problems being faced by a country, according to one analyst. 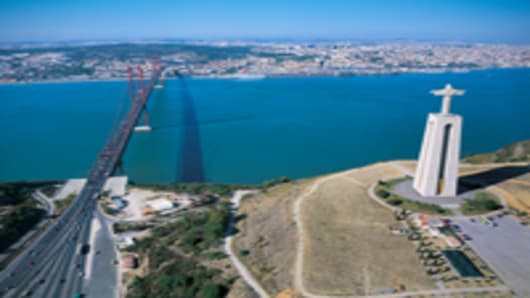 "Portugal has become the poster child of an Entitlement Society – the public sector has extended everywhere and private capital has been crowded out by the need to keep the public sector employment in place," said Steen Jacobsen, the chief economist at Saxo Bank, in a note sent to CNBC.

"The only solution to Portugal’s catch-22 is to create real private sector growth and to cut the public sector down in size."

With growth already very low and 2011 and 2012 expected to see Portugal mired in recession, Jackobsen sees the chance of social unrest in Portugal, whoever the government is.

"Even more importantly than GDP growth rates, unemployment will rise to 11.7 percent and then 12.7 percent over the next two years from present 10.8 percent! That’s a recipe for a social upheaval"

With Portugal’s problems so big Jackobsen believes even doing the "right thing" will not offer much hope in the short-term.

"Portugal has gone beyond the point of no return – the problems facing the country are not merely those of 'challenges', but massive, structural intractable problems."

"Even if Portugal did the 'right thing' – curtailed the public sector, refinanced the banks, and created a pro-business, pro-growth agenda, it would take years, not months before Portugal again starts moving forward”

With the problems now being faced being years in the making Jackobsen believes the only reason things have been able to get this bad has been membership of the euro and the German credit rating this once guaranteed.

"It is time for Portugal to move forward – I hope the new prime minister is not merely a man of words but also of action. Portugal has always played a unique role in history and could do so again for better or worse," said Jakobsen.