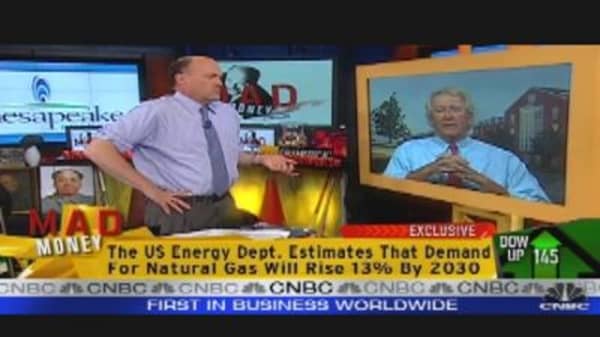 Chesapeake Energy CEO Aubrey McClendon on Tuesday dismissed claims surrounding shale plays that were made by a New York Times article called "Insiders Sound an Alarm Amid a Natural Gas Rush," in which sources claim that companies have been overstating their supply of shale gas reserves and liken the entire natural gas industry to one giant "Ponzi scheme."

"It's ludicrous," McClendon told "Mad Money's" Jim Cramer. "We think we are absolutely understating the amount of gas because all we can really talk about publicly is the amount of proved reserves we have and they are dwarfed by the unproven reserves—the reserves we'll be developing for decades to come.

"Every part of the market, every bit of science is out there that says that we're at the very beginning of the shale gas revolution."

Yet the New York Times and other media entities continue to attack the industry, Cramer noted. McClendon suggested the industry is being targeted by the media. Instead of talking about the positives of natural gas, McClendon said the New York Times has been "captured by environmental extremists." The paper could have talked about how the fuel can power the U.S.'s transportation system, reduce foreign imports and show that natural gas is the "one real bright spot of the economy today."

"I was perplexed," Cramer said. "If anything, the industry may be understating how much nat gas there is in this country."

"Could they all be useful idiots of a couple of nat gas charlatans?" he asked. "As an investor, you need to be able to distinguish real information from pure sensationalism."