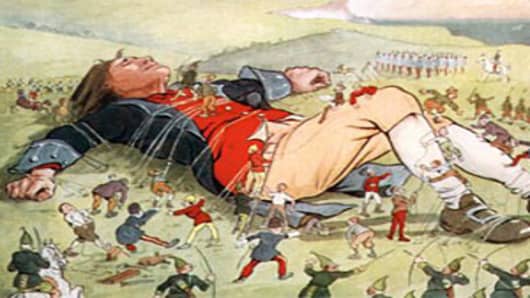 This is the latest demonstration of how the debate over how to tax hedge fund managers is increasingly framed in moral language rather than economics. The reason for the reframing is simple: Raising taxes on hedge fund managers will produce negligible revenue gains for the government. So the only coherent case must rest on morality.

But the notion that taxation of carried interest is an “unconscionable tax break” is the moral equivalent of a vampire going down in flames the moment it is exposed to the light of thought.

Under current law, investors in hedge funds and hedge fund managers pay the same tax capital gains rates—which max out at 15 percent—on the gains from hedge fund investment activity. This makes sense: We’re taxing the activity of investing in way that is neutral to the source of the invested capital. Since it’s economically irrelevant whether the capital is invested by its owner or the agent of the owner, it makes sense to have tax law treat it as irrelevant.

This most likely leads to more efficient investing. There’s no reason to suspect that those who have managed to accumulate wealth during earlier periods are especially good at investing that wealth.

Introducing differential taxes would introduce a new externality into financial markets, throwing sand into the gears of the economy.

The economist Ronald Coase long ago taught us the economy operated better with fewer transaction costs preventing economic resources being allocated to their most valued use. Raising taxes on resources simply because the investment decisions are made by a hedge fund manager rather than the original owner introduces a cost that will distort the efficient allocation of capital.

Senator Levin’s tax proposals would privilege investors who have already accumulated wealth while penalizing those who have not. From a populist perspective, isn’t this the real “unconscionable tax break?”

The debate is wildly distorted by an cognitive error. Most hedge fund managers are invisible to the public. The only managers who come close to being household names are the fabulously wealthy. People like SAC Capital’s Steve Cohen or Citadel’s Ken Griffen. But these guys don’t actually need to invest anyone else’s capital at all. They’re so rich that they could just run their own money. In fact, several hedge funds are run this way already. Raising taxes on money taken from outside investors will only increase this trend.

The people most hurt by the tax hike would be the start-up funds. It’s already hard to raise capital if you are a young hedge fund manager with a great idea. Institutional investors have built-in biases for the biggest funds—even though this it is usually a bad idea to chase the past successes of hedge fund managers. Raising taxes on the gains of their funds would further entrench the old guard of hedge funds.

Tax law should not be a “respecter of persons” when it comes to capital gains. It shouldn’t show favoritism toward established money against the rising generations. It shouldn’t penalize those who run the wealth accumulated by others. If we believe those words of the Declaration of Independence—that all men are created equal—let’s have a tax system that treats all of their investment activity equally.