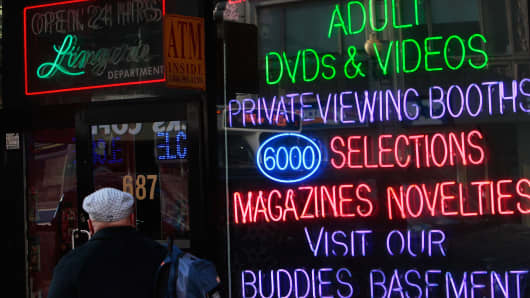 Sex sells, duh. And, apparently, during an economic recession, sex-related sales—from Trojan condoms to wine and chocolate—have been particularly hot.

“At a time when unemployment is high and bank account balances are low, people are passing the time by getting busy,” Stefan Dallakian, the owner of Paris Intimates – an online sex toy distributor—told me. It's estimated that the sex-toy business is a $15 billion industry. As the U.S. economy has worsened, Dallakian said that he has seen sales for sex toys skyrocket.

At a time when the average consumer has less disposable income, Dallakian actually said that the Return On Investment, or ROI, has been quite high. Some models even come with a 10-year warranty, which he said, “works out to less than a penny per use, which makes it a much better investment than the stock market.”

While there are numerous offerings for a thrill on a budget (“sex toys are like shoes: there are lots for men, tons for women and a handful for both,” Dallakian said), customers with bigger wallets can find toys at higher price points as well. One such product, which Dallakian calls “the Bentley of vibrators at the price of a well-equipped Hyundai,” uses medical grade silicone in its premium design. Made by a Swedish company, the toy, which is worth several hundred dollars, can now be purchased online for $125.

Sex toy sales are especially on the rise with the younger generation in part because they have grown up in a culture that is more open to sexuality in many different forms, and in part because “younger generations are dealing with more stress than they have ever known,” Dallakian said. When it comes to the latter, Dallakian suggested that few things offer such relief as that “sexual healin'.”

A steady 9 percent unemployment rate and growth in self-employment also means that Americans are spending more time at home. And, as the idea of a “Staycation” has only received more buzz lately, people continue to opt to stay home in order to save money on gas and lodging. Dallakian says those economic realities only contribute to business by upping the desire for sexual expirimentation and being more in touch with our bodies and our partners. “Couples that log more hours together have stronger communication, and that is evident in the bedroom,” he said.

Whatever your thoughts on bringing toys into the bedroom, Dallakian made it clear: right now, the business of making love is making bank.