Navigating America’s fiscal swamp - even if investors don’t fall in - will not be pretty, according to Citi Chief Economist Willem Buiter. 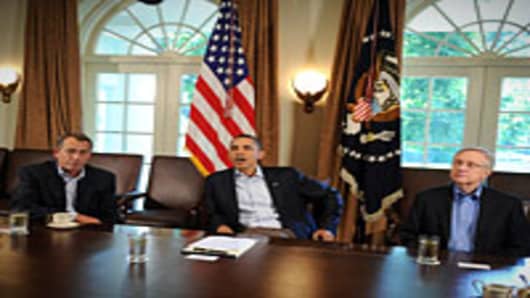 Jewel Samad | AFP | Getty Images
US President Barack Obama (C) speaks with US Speaker of the House John Boehner as Majority Leader Senator Harry Reid looks on during a meeting in the Cabinet Room at the White House in Washington, DC, on July 23, 2011.

While Buiter believes it is unlikely the US will actually default amid deadlock in Washington over raising the debt ceiling, he thinks the likelihood of such an outcome is no longer negligible.

“The implications of even a technical US default are likely to be severe both for the US and the world economy, involving a widespread rise in public and private funding costs, a generalized fall in asset prices, and a large hit to economic growth,” said Buiter in a research note.

Seeing little chance of Republicans and Democrats signing off on a long-term plan to return the US to fiscal sustainability, Buiter believes S&P are likely to follow through on their threat to cut America’s credit rating to at least AA.

“The consequences of a US downgrade to AA are likely to be much less severe than those of a US default, but still significant and involve direct and indirect responses,” he wrote.

The direct responses to a downgrade would not be that damaging, according to Buiter, who does not see a major impact from investors, with requirements to solely invest in AAA-rated securities being small.

But the indirect responses to a downgrade could be far more important.

“Increases in US sovereign and private funding costs; a hit to sentiment and generalized risk aversion; and further growing doubts about the status of the dollar as an international currency and US (Treasurys) as an international risk-free asset” are the main risks according to Buiter.