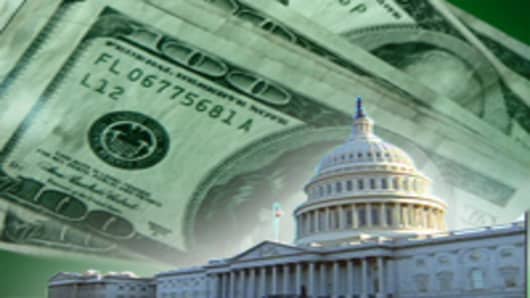 This has been the claim of monetary theorists for decades. Milton Friedman certainly thought so. More recently, it is a claim that can fairly be attached to money proponents of what is often called Modern Monetary Theory or MMT.

One of the key insights of MMT is that governments operating with fiat currencies are not revenue constrained. They do not need to raise funds either through taxes or borrowing in order to spend. And they do not need to “print money” either. They can simply create money by crediting bank accounts.

Of course, the MMT economists are well aware that under normal economic circumstances this could be inflationary . But this is where tax policy can fit in: By taxing money, the government removes it from the economy. Similarly, the government could remove money from circulation by issuing bonds or paying interest on reserves.

To put this slightly differently, from this perspective all government spending is inflationary in the older sense of the word favored by Austrian economics types. Spending is monetary expansion. (Please note: I’m not saying all spending results in higher prices—this depends on many other factors besides the expansion of money.)

Taxation, bond issuance and interest on reserves at the central bank are secondary tools used to combat the inflation introduced by government spending.

This has an important implication for politics: If the economy is underperforming, the government should dramatically lower taxes.

Since the government never needs tax revenue to fund its spending, any tax revenue it collects beyond what it needs to fight inflation is just wealth destruction. It is literally destroying our ability to spend money we’ve earned for no reason at all.

But there’s another implication, which is a lot less cheerful, that arises from the idea of a government that is not revenue constrained.

The belief among politicians that they must “raise” money they spend from somewhere constrains their spending. Politicians freed from this belief would, I suspect, be more likely to embrace spending. I think a lot of people attracted to the ideas with MMT agree with me about this.

If you have a benevolent view of government spending, this might not be alarming. But if you view government spending as largely controlled by special interest groups, the MMT-inspired liberation from revenue constraints looks very dangerous.

In the first place, in any environment where taxes are above zero, you are effectively substituting government spending for private spending.

This substituted spending is distributed politically rather than economically, and according to centralized decision making. This means mistakes get multiplied across the economy and you get an efficiency loss as special interests compete for a piece of the pie rather than an expanded pie. All along, the pie gets smaller than it would be otherwise.

Worse, because the government is deciding who will be given additional spending power, it is the spending priorities of the special interest government clients that influence the direction of economic growth.

This almost certainly promises a misallocation of wealth, slower growth and inequity.

Those who are closest to the government—government employees, banks, government contractors—receive the newly created money first. They are able to spend it into the economy before prices rise as a result of the monetary expansion.

If government combats inflation through taxes, it makes matters worse because those direct beneficiaries of government spending are typically able to avoid taxes better than those further removed from the government. So the government is destroying money earned by Paul in order to eliminate the economic effects of giving money to Peter.

In short, the part of the monetary system that some MMT enthusiasts regard as a feature seems to me a lot more like a bug.

“Note that [John Carney] opposes MMT because it is substantively correct. That is the oddest objection to a theory that I have seen presented,” William Black has written over at New Economic Perspectives.

I think that’s largely right. The problem with MMT is that it fully understands the way our monetary economy operates but doesn’t couple this with a full understanding of the way our political economy operates. The likely consequence of MMT’s influence on politics is not more rational policymaking. It’s more crony capitalism.