Federal Reserve Chairman Ben Bernanke reiterated the central bank's commitment to providing stimulus for the wobbly US economy but offered no specific promises or details about what action could be taken. 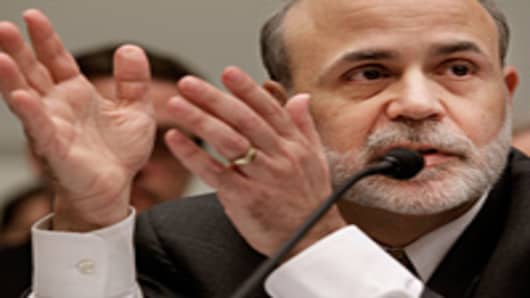 Speaking from Minnesota and with financial markets closely watching what Bernanke would indicate regarding Fed intervention matters, he said the central bank still has tools at its disposal to foster economic growth.

Speculation has been that the Fed will implement a revised version of its Operation Twist, first used in 1961 to drive down interest rates by selling short-term debt and buying long-term. While Bernanke did not address that idea specifically, he did elaborate on his economic observations.

Breaking from his position that the economy was suffering "transitory" difficulties, Bernanke conceded the problems are not merely temporary. Among them are the inability of the housing market to recover and the lingering effect of the financial crisis.

"It is clear that the recovery from the crisis has been much less robust than we had hoped," he said, according to prepared remarks.

"The incoming data suggest that other, more persistent factors also have been holding back the recovery," he added. As such, the Fed "now expects a somewhat slower pace of recovery over coming quarters than it did at the time of the June meeting, with greater downside risks to the economic outlook."

He also repeated his call for Congress and the White House to implement proper fiscal measures to control the national debt and budget deficit.

Stocks had wavered earlier in the session but sold off as Bernanke's remarks became public.

The Fed meets Sept. 20-21 and market speculation has ranged from the Fed implementing a third round of quantitative easingto Operation Twist to other measures as well, including cutting the interest it pays on reserves that banks deposit at the Fed.

Bernanke gave a nod toward the notion that the economy has not recovered as quickly as it should have, despite the unprecedented levels of stimulus from both the Fed and Congress. 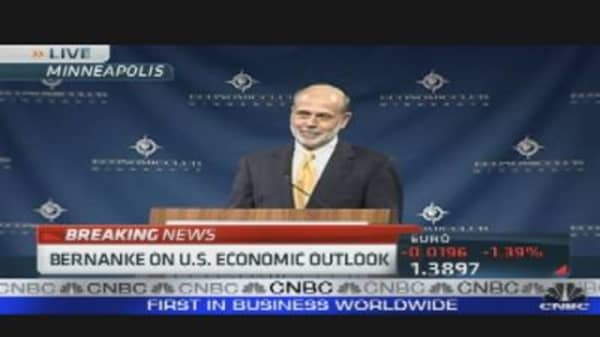 "Unfortunately, the recession , besides being extraordinarily severe as well as global in scope, was also unusual in being associated with both a very deep slump in the housing market and a historic financial crisis," he said. "These two features of the downturn, individually and in combination, have acted to slow the natural recovery process."

As for specific remedies, he said the Fed would continue to weigh its options.

"In addition to refining our forward guidance, the Federal Reserve has a range of tools that could be used to provide additional monetary stimulus," Bernanke said. "My FOMC colleagues and I will continue to consider those and other pertinent issues, including, of course, economic and financial developments, at our meeting in September and are prepared to employ these tools as appropriate to promote a stronger economic recovery in a context of price stability."