The golden goodbye has not gone away.

Just last week, Léo Apotheker was shown the door after a tumultuous 11-month run atop Hewlett-Packard . His reward? $13.2 million in cash and stock severance, in addition to a sign-on package worth about $10 million, according to a corporate filing on Thursday. 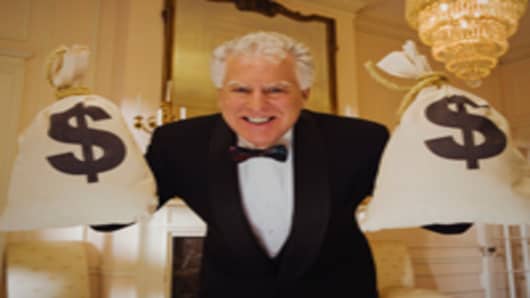 At the end of August, Robert P. Kelly was handed severance worth $17.2 million in cash and stock when he was ousted as chief executive of Bank of New York Mellon after clashing with board members and senior managers. A few days later, Carol A. Bartz took home nearly $10 million from Yahoo after being fired from the troubled search giant.

A hallmark of the gilded era of just a few short years ago, the eye-popping severance package continues to thrive in spite of the measures put in place in the wake of the financial crisis to crack down on excessive pay.

Critics have long complained about outsize compensation packages that dwarf ordinary workers’ paychecks, but they voice particular ire over pay-for-failure. Much of Wall Street and corporate America has shifted a bigger portion of pay into longer-term stock awards and established policies to claw back bonuses. And while fuller disclosure of exit packages several years ago has helped ratchet down the size of the biggest severance deals, efforts by shareholders and regulators to further restrict payouts have had less success.

Several years ago, the Securities and Exchange Commission turned a brighter spotlight on severance deals by requiring companies to disclose the values of the contracts in regulatory filings. More recently, the Dodd-Frank financial reforms required that public companies include “say on pay” votes for shareholders to express opinions about compensation — including a separate vote for golden parachutes initiated by a merger or sale.

Yet so far, few investors have gone to battle. Only 38 of the largest 3,000 companies had their executive pay plans voted down, according to Institutional Shareholder Services. Even then, the votes are nonbinding.

Severance policies typically call for a lump-sum cash payment, the ability to cash out stock awards and options immediately instead of having to potentially wait for years. And that’s not counting the retirement benefits and additional company stock that executives accumulate, which can increase the total value of their exit package by millions of dollars.

Some critics believe investors have become inured to the hefty payouts. In addition, the continuing financial crises in Europe and the United States have pushed compensation into the backseat on the shareholder agenda.

“People are preoccupied with the bigger issues,” said Frederick Rowe Jr, a hedge fund manager and president of Investors for Director Accountability which has sought to curb excessive pay.

The Obama administration, meanwhile, seemed to lose its bully pulpit for compensation reform after most of the nation’s biggest financial companies repaid their government loans — and Kenneth R. Feinberg, its tough-talking pay overseer, moved on to tackle other issues.

Federal Reserve officials flagged golden parachutes as a concern when they began a compensation review almost two years ago, but their inquiry was limited to large banks — not all large companies. The findings of the review are expected to be made public in the next few weeks.

Over the last year, regulators have been pressing corporate boards to draft policies denying huge severance payouts to senior executives if the firm teeters on collapse. That still leaves wiggle room for managers to score big if they merely perform poorly.

Practices such as large cash payouts and having shareholders pay the tax bill for departing executives are on the decline, especially after the uproar over the $200 million-plus exit packages of Hank McKinnell of Pfizer and Robert Nardelli of Home Depot in the last decade.

Mr. Zdrazil and other shareholder advocates say that investors have made some progress by pressuring companies to reduce the cash portion of severance packages to about two times salary from three. Now boards are under pressure to tighten the rules that speed up the ability of departing executives to cash out big chunks of stock. Only a few corporations, like Exxon Mobil , have policies where executives must forfeit their unvested stock options if they are forced out.

Some CEO’s do not negotiate big payouts. Oswald Grübel, the chief executive of UBS who stepped down last week after a trader concealed more than $2.3 billion of losses, will receive $1.6 million (1.5 million Swiss francs), equivalent to the standard severance package of six months’ salary given to all senior executives at the Swiss bank.

Many chief executives continue to walk away with seven or eight-figure severance packages, according to an analysis by James F. Reda & Associates, an executive compensation consulting firm.

The chief executive at Massey Energy was awarded a large severance contract despite presiding over a company barraged with accusations of reckless conduct and with legal claims stemming from one of the deadliest mining disasters in memory. In June, Baxter F. Phillips Jr. was awarded nearly $14 million in cash and stock severance after the company was sold to a competitor, Alpha Natural Resources. Ted Pile, a spokesman for Alpha Natural Resources, said his company was required to honor an employment contract “put in place before we acquired” Massey.

Another chief executive received severance payments after his company was accused of fraud. At Beazer Homes, Ian McCarthy was ousted as chief executive three months after the company settled with the SEC. for filing misleading financial statements. Mr. McCarthy was forced to repay about $6.5 million.

But what the government took away, Beazer’s board gave back. Mr. McCarthy was awarded a severance package worth about $6.3 million — and was reimbursed for up to $10,000 of legal fees associated with his termination. Beazer did not respond to a request for comment.

Perhaps the biggest reason that golden parachutes persist is that corporate boards hire superstar chief executives, rather than groom strong managers inside the company for the top job. That gives outsiders a stronger hand to demand all kinds of upfront stock awards and lucrative severance deals when they are hired. So when things do not work out, that “golden hello” turns into a “golden goodbye.”

That is what happened with Ms. Bartz, a hard-charging technology executive who was brought in to help turn around Yahoo in 2009. She was given a sign-on package worth over $47.2 million in cash and stock, and pay worth an additional $11.9 million in 2010, according to Equilar, an executive compensation research firm.

But after her plans to revive the beleaguered search giant failed to improve its results, Yahoo’s board fired Ms. Bartz this month. She walked away with a large allotment of deeply depressed stock options as well as cash severance worth about $5.2 million. The company said some of the stock was subject to future performance goals.

At Hewlett-Packard, its revolving door for chiefs has led to tens of millions in severance payouts even as thousands of employees have lost their jobs. In 2007, Carly Fiorina walked away with more than $21 million in cash-stock severance, after she struggled to turn around the company. Her successor, Mark V. Hurd, left with severance of more than $12.2 million after he was forced to step down amid accusations of an improper relationship.

Now comes Mr. Apotheker’s $13.2 million severance payout when the stock price was cut in half. That is made up of $7.2 million in cash, the ability to sell $3.6 million of restricted stock and a $2.4 million bonus. HP, which paid $2.9 million to relocate Mr. Apotheker to California, will now pay to move him to Belgium or France and cover losses of up to $300,000 on the sale of his house.

On Thursday, HP released a regulatory filing showing that Meg Whitman, its new chief executive, would receive a sign-on package worth about $13.1 million, according to an analysis of the filing by Equilar. Much of the compensation comes from a stock option grant that is subject to certain performance targets. She also stands to collect severance if she leaves.

Lloyd Doggett, a Democratic representative of Texas and senior member of the House Ways and Means Committee, said excessive severance packages were “outrageous.”

“The whole concept that the only way to get rid of bad management is to buy them off is fundamentally wrong” he said.