When you're trying to land a big fish, you need a big boat. 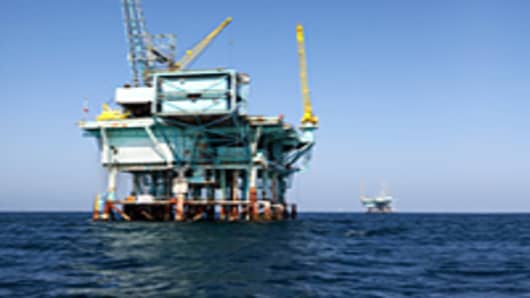 For Edison Chouest Offshore, to land the big jobs building the massive service vessels oil companies want for new deepwater exploration meant expanding its business — in the midst of the 2008 financial crisis . It committed $100 million to build a new shipyard with a 117,000-square-foot shipbuilding facility.

"The energy business probably represents 80 percent of our business," said CEO Gary Chouest, whose family-owned Louisiana firm counts energy giants BP and Shell as some of its major customers. "We were betting the work would continue."

The company secured $10 million in state funding for the infrastructure to support the project, on the promise that the new facility in Houma, La., would mean a thousand jobs in the area.

Edison Chouest's big bet paid off, helping the company land a $200 million contract with Shell to build a massive 10,000-ton anchor and icebreaking ship, which will span the length of a football field and the height of a 20-story building, for oil exploration in Alaska.

"It's such a huge project—over two million man hours of construction," Chouest said, enough that he's been able to spread construction among his firm's four shipbuilding facilities in Louisiana, Mississippi, and Florida over the last year.

Unemployment in the Houma area, where the new facility opened just over a year ago, dipped below 5 percent in August, according to the U.S. Labor Department, down from 5.8 percent a year earlier.

Peter Slaiby, vice president of Shell Alaska, says the kind of economic impact its seen at Chouest and Houma will be multiplied if the energy giant gets the go ahead to drill for oil in Alaska.

"It’s something that has a full life cycle with respect to jobs," he said, pointing to a study by the University of Alaska that estimated oil drilling in the region could create 54,000 jobs over several decades. "It’s really creating generational amounts of jobs, and this is the impact I think you can see looking at something like the Beaufort and Chukchi seas' opening up for exploration." 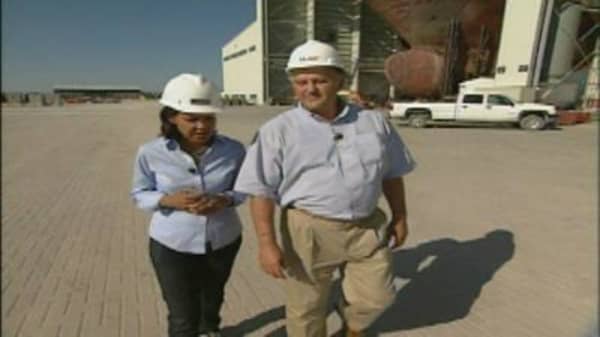 While Shell has already spent more than $3 billion in preparation to drill in Alaska, at this point the Department of the Interior has only given the energy giant conditional approval to begin exploratory drilling in the Beaufort Seas, along the North Slope of Alaska. Just this week, it upheld 2008 oil leases, which had been challenged in the Chukchi Sea on the Arctic Coast.

But even as Shell appears to be making regulatory headway, a consortium of environmental groups have sued to block the company's exploration plans, on concerns the company's spill response plan is inadequate when it comes to drilling in the Arctic.

"Although the oil industry would have us believe that jobs is our number one priority, it's jobs with the control of risk," argues Whit Sheard, an attorney with Earthjustice, which is representing the environmental plaintiffs in the case, including the Sierra Club and the Natural Resources Defense Council.

"You simply can't clean up an oil spill if one occurs" in the remote region, he maintained. "The Coast Guard has told us that, and the U.S. Geological Survey has told us that basic scientific questions remain as to whether or not we can drill up there without causing impacts."

Combined, the Beaufort and Chukchi seas are believed to hold more than 25 billion barrels of oil and more than 120 trillion cubic feet of natural gas, according to the Bureau of Ocean and Energy Management.

But while oil exploration advocates once rallied around the catchphrase, "Drill, baby, drill," when oil prices were sky high and energy security was a hot issue, the battle cry now comes down to one word in a nation facing stubbornly high unemployment.

"The new catchword is jobs," said Fadel Gheit, energy analyst with Oppenheimer. "Nobody is going to go against jobs."

The pressure on the administration is so great, he says, it is giving energy companies a persuasive argument for greater permitting and faster regulatory approvals.

But Earthjustice's Whit Sheard argues that the administration should also consider the economic impact of pushing the envelope on drilling when things go wrong, noting that the BP oil spill in the Gulf of Mexico resulted in lost fishing industry jobs in Louisiana, and a summer of uncertainty and curtailed tourism along the Gulf Coast. While in Alaska, he maintains, the environmental impact of the 1989 Exxon Valdez oil spill is still being felt.

"What we've seen in the Exxon Valdez and the Deepwater Horizon is that the risk is not shared by the appropriate parties," he said. "The risk is born by the American public."

Edison Chouest has built two icebreakers for the National Science Foundation, which it has also contracted to operate for the group's environmental exploration in Antarctica.

But CEO Chouest said he can't build a sustainable business just on environmental work alone. "There's not enough demand for it," he said.

While his firm is still seeing demand for services, Chouest is not sure how he'll keep his shipbuilders busy once they complete the Shell vessel in the first quarter of 2012. With deepwater exploration still sluggish in the Gulf of Mexico, and the pace of approvals for Alaska exploration also slow, it could be a while before he gets another big ship in the pipeline.

"We're hopeful that the oil industry will continue to get permits," he said. "Alaska holds a huge potential, not only for the people of Alaska but the people of Louisiana."