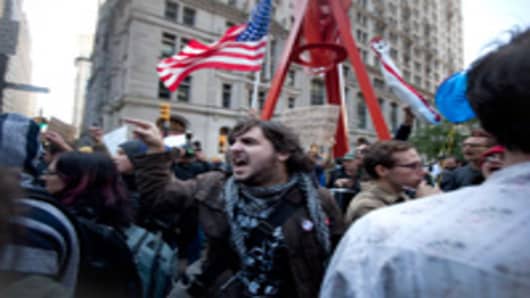 Getty Images
People scream at the New York police officers after an arrest was made on Broadway in front of Zuccotti Park, where demonstrators protesting against the financial system are gathering on September 19, 2011 in New York City.

The anarchy of occupy Wall Street is as literal as it is organized.

Taken literally, anarchy means that there is no government. No one in charge.

Down here at Zuccotti Square, where the Occupy Wall Street protesters have been encamped for nearly four weeks, there is no one in charge.

But there is a lot of organization.

The protesters have organized themselves into a dozen or so "working groups" that deal with various issues. There's a security working group that handles crowd control and relations with police. An arts and culture group puts on art exhibits at the site. There's even an Occupy Wall Street archivist group that collects pamphlets, signs, and protest diaries in hopes if creating a historical record of the event.

Each working group has daily meetings. Many have additional events a few days a week.

At 7:30 p.m., there is a "general assembly" or GA. On most nights, the working groups give a brief report to the crowds, detailing their accomplishments and plans.

Audio amplification isn't permitted by the police, so the the reports are communicated throughout the protest by an elaborate version of the children's game "Telephone." After the speaker says a few words, he or she pauses while members of the crowd chant out the words. That chant is then repeated by people farther away from the speaker.

Sometimes the exact words are garbled, but the message gets through.

It's a very organized anarchy.