There Must Be A Pony In Here Somewhere 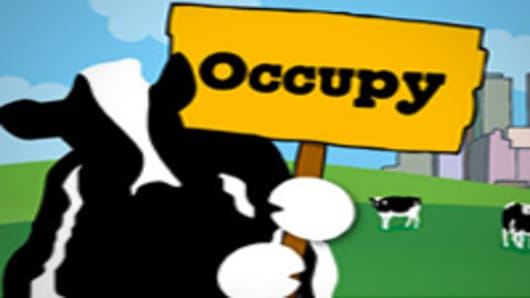 The company put out a detailed statement of support on its website, which includes an image of one of its signature cows holding an “Occupy” sign with a headline, “To those who Occupy: We stand with you.”

At first it may seem a bit ironic — after all, Ben & Jerry’s is owned by Unilever, a massive multinational corporation with a market cap of about $50 billion.

At heart, however, they’re still a couple of socially minded guys from Vermont who set out to make really tasty ice cream in a refurbished gas station — and not screw up America in the process.

And, while many of the protesters don't seem to be clear about exactly what it is that they’re protesting, Ben & Jerry's (well, its board) lay out a clear set of issuesthat it believes the protests have raised and that it agrees must be addressed:

The company's statement is more lucid than 99 percent of the protesters — yes, I meant to say that — and, frankly, more coherent than anything we've heard from election-crazed politicians, who are flapping their traps up, down, left, right, and center without getting much of anything done.

While most corporations would put out sterile, politically correct statements instead of getting their hands dirty, Ben & Jerry's isn't afraid to stick both hands in the vat and mix it up.

After the company lists the issues, it offers a frank statement of support to the protesters: "We know the media will either ignore you or frame the issue as to who may be getting pepper-sprayed, rather than addressing the despair and hardships borne by so many … all this goes on while corporate profits continue to soar and millionaires whine about paying a bit more in taxes ... We support this call to action and are honored to join you in this call to take back our nation and democracy.”

Ben & Jerry's recent “Schweddy Balls”misstep— when it took a hilarious Alec Baldwin Saturday Night Live TV show sketch and turned it into an awkward ice cream flavor — made us think maybe the company was losing its Chunky Monkey touch. But this in-touch move by a company that, for all practical purposes sold out to Corporate America, gives us fresh, chocolate-chunk-filled hope that its still got it.

Which begs the question: If Ben & Jerry's makes a Wall Street Super Protest Chunk flavor, what do you suppose would be in it?

That's easy — swirls of outrage, chunks of unemployed bitterness and — wait for it — clusters of nuts.

Questions? Comments? Email ponyblog@cnbc.com or drop a line in the comment box below.

More from The Pony Blog: ponyblog.cnbc.com