Ex Olympus CEO Ties Ouster to His Claim of Fraud

The British executive who was publicly pilloried as a bad manager when the Japanese company Olympus fired him on Friday, struck back on Monday, saying he was forced out because he was about to expose potential financial fraud at the company. 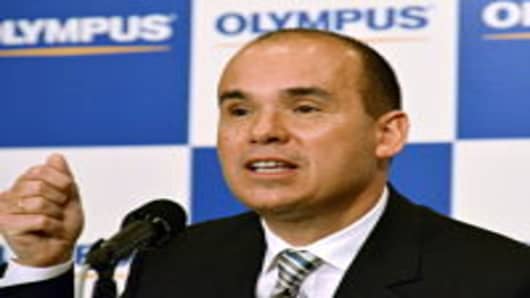 The executive, Michael C. Woodford, on Monday delivered a dossier of what he called “condemning” evidence on Olympus to Britain’s Serious Fraud Office in London.

Mr. Woodford, 51, said he had confronted the Olympus chairman, Tsuyoshi Kikukawa, in Tokyo last week with a report he had commissioned from the accounting firm PricewaterhouseCoopers.

The report, he said, raised questions about almost $700 million Olympus had paid to financial advisers over the acquisition of a British medical technology company in 2008.

The PricewaterhouseCoopers report says that improper conduct could not be ruled out.

Mr. Woodford said that he had demanded Mr. Kikukawa’s resignation, only to have the chairman convene a board meeting in Tokyo on Friday in which Mr. Woodford, the only non-Japanese executive among the 15 directors, was fired. Mr. Woodford said the entire board had known about the PricewaterhouseCoopers report but had not taken action.

“Olympus needs a complete and utter forensics accounting,” Mr. Woodford said Monday during a telephone interview from London. “I’d be delighted to return and put in a new management structure,” he said. “But with or without me, the board should all go.”

Olympus denied any wrongdoing and declined to make Mr. Kikukawa available for an interview.

Mr. Woodford, a 30-year Olympus veteran, had been president since April and had been given the chief executive’s post only in September.

Separate from the transaction covered in the PricewaterhouseCoopers report, Mr. Woodford said he had also made inquiries into Olympus’s acquisition in 2008 of three small Japanese companies unrelated to Olympus’s core businesses for almost $600 million. Those investments, which were not covered in the accounting firm’s report, were written down to only a quarter of their value within the same fiscal year, he said.

In all, Mr. Woodford said, the transactions he is questioning resulted in the destruction of $1.3 billion in shareholder value at Olympus, a maker of cameras and medical equipment. The transactions, he said, occurred under Mr. Kikukawa, who preceded him as chief executive before becoming chairman.

“To be that incompetent is difficult to imagine, which suggests that there is something more sinister going on,” Mr. Woodford said.

Yoshiaki Yamada, a spokesman in Tokyo for Olympus, maintained Monday that Mr. Woodford had been stripped of his title because his leadership style had created “a big gap” with the rest of management, which was “inhibiting decision-making.”

“All of our mergers and acquisitions have been carried out with proper accounting, and through appropriate procedures and processes,” Mr. Yamada said.

He could not confirm a report, by Reuters, that Olympus was considering legal action against Mr. Woodfordfor disclosing confidential company information to the news media.Mr. Woodford’s allegations were first reported by The Financial Times.

Since Mr. Woodford’s dismissal on Friday, Olympus has lost more than $3 billion in market capitalization. The stock sank 22 percent in Tokyo on Monday after losing 18 percent on Friday, when the company fired Mr. Woodford.

Mr. Woodford said the transactions first came to his attention in late July, when an article in the Japanese finance magazine Facta raised questions about Olympus’s acquisition of the three Japanese companies. But when Mr. Woodford asked Mr. Kikukawa about the article over lunch in early August, he said the chairman told him it was “a domestic situation” that the Briton need not worry about.

Two weeks ago, Mr. Woodford said he commissioned PricewaterhouseCoopers to examine the 2008 purchase of the British medical technology firm, Gyrus. Mr. Woodford said he sent a copy of the accounting firm’s report to Mr. Kikukawa last week, along with a letter in which Mr. Woodford called the transactions “shameful” and called for the resignations of the chairman and two other executives.

He said he also sent the report to all members of the Olympus board and suggested to Mr. Kikukawa that they meet Friday to discuss “where we go from here.”

But on Friday morning, Mr. Kikukawa held an emergency board meeting, where Mr. Woodford said he was not allowed to speak. His dismissal came despite Olympus’s public praise of Mr. Woodford this year for his turnaround of its European arm.

The PricewaterhouseCoopers report commissioned by Mr. Woodford, dated Oct. 11, outlines a range of possible offenses under Mr. Kikukawa’s leadership, including false accounting and breaches of duties by the board.

PricewaterhouseCoopers said on Monday that the firm could neither confirm nor deny that it had done any work for Mr. Woodford or Olympus.

According to the report, a copy of which Mr. Woodford made available to The New York Times, Olympus made $687 million in payments to two financial advisers in connection with its 2008 acquisition of Gyrus.

That amount came to more than a third of the $2 billion purchase price of Gyrus — far above a market rate for fees for comparable services that typically amount to only 1 to 2 percent of the transaction fee, the report says.

One of the advisers, AXAM Investments in the Cayman Islands, was removed from the Cayman local business registry last year for nonpayment of license fees, the report says. It adds that agreements were entered into by Mr. Kikukawa and two executives with no formal board approval.

“We were unable to confirm that there has been improper conduct, however, given the sums of money involved and some of the unusual decisions that have been made, it cannot be ruled out,” the report said.

In a separate inquiry, also outlined by Mr. Woodford in the letter to Mr. Kikukawa, Olympus completed the acquisition of three companies — including a maker of facial creams and Tupperware-like plastic cases for use in microwave ovens — in 2008 for $773 million. But later that fiscal year $586 million of their value was written off, Mr. Woodford’s letter says.

“Please — be serious,” Mr. Woodford said in the telephone interview. “Face cream for a company like Olympus? And paying that much for it?”

Mr. Woodford said Monday that he had handed over the PricewaterhouseCoopers report on the Gyrus acquisition to the Serious Fraud Office, along with his correspondence with Mr. Kikukawa and the Olympus board.

The office is a British government body that investigates allegations of complex fraud and corruption. It has wide-ranging powers to seize documents related to activity in Britain and can bring criminal charges under British law. Because the Gyrus unit is based in Britain, the case might fall within the office’s purview.