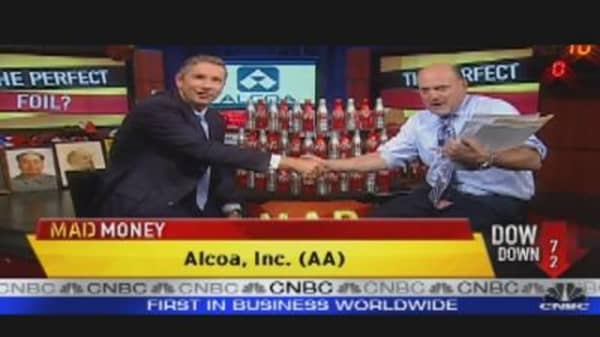 Aluminum producer Alcoa may have fallen short of analysts’ expectations when it reported its third-quarter earnings, but CEO Klaus Kleinfeld is positive about the company and where it’s going.

The company has also guided up in China, increasing its demand forecast from 15 percent to 17 percent.

The stock was hammered after Alcoa reported a 7 cent earnings miss off a 22 cent basis last week. It regained its footing over the next few days, but pulled back again Wednesday. It is down 37 percent-year-to-date.

“This was a very difficult quarter. A lot of things happened. We saw the European economy basically falling down due to the European debt crisis. We also saw the metal price coming down pretty substantially,” Kleinfeld told Cramer Wednesday. “But let’s get one thing straight—out of the last nine quarters, eight of those not only did we meet expectations, we also beat expectations quite often.”

He thinks what we’re seeing in the stock price right now is broad-based confidence destruction.

”I am more concerned about the lack of confidence than the market fundamentals,” Kleinfeld said, “and that’s what’s happening here.”

So with the stock down so low, is it time to dive in?

Cramer certainly thinks so. He calls it the “best value” on the Dow Jones Industrial Average.

“Right now, I think that the risk is very minimal and the reward is very big,” the “Mad Money” host said.

When this story was published, Cramer's charitable trust owned Alcoa.