On Wednesday, investors were trying to determine how to put money to work, after Apple stunned the Street with a rare earnings miss.

Considering the tech titan usually blows past expectations, investors were starting to wonder if the bulls were plain out of of gas.

However, top investor Leon Cooperman, the chairman of hedge fund Omega tells Fast Money in an exclusive interview that if you’re looking to buy – don’t get spooked by Apple earnings. Buy stocks, he says.

And although he released a list of 10 favorites at the Value Investing Congress earlier in the week- he brings Fast Money an exclusive idea – longMet Life. ”The stock is trading at 6 times earnings – and 70% book value – with substantial excess cash generation,” Cooperman tells us.

But don't think Met Life is the only non-bank he likes. Cooperman tells us his most of financial exposure is in non-banks and at the Value Investing Congress said he liked KKR Financial Holdings , SLM , ACE Ltd. and E* Trade. (If you watch Fast Money often you know that's something that strategic investor Doug Kass says as well.) 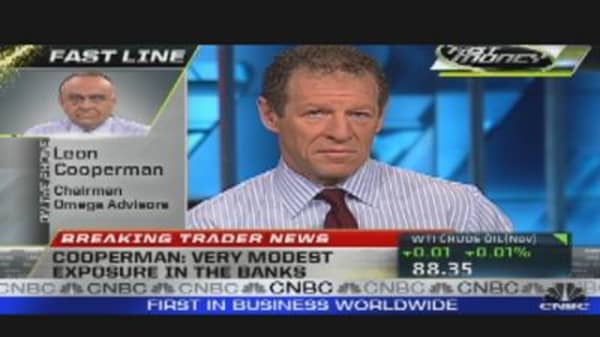 And on a related note, Cooperman also suggests looking at Apple. ”We think the pullback is a buying opportunity.”

Why is Cooperman so keen on stocks?

Cooperman tells us, “though I’m not ebulliently bullish – stocks are the best house in the financial asset neighborhood. Although he recognizes the risks, his thesis is based on a few assumptions.

1. The US will avoid recession and remain in a slow -growth environment at worst.

2. The ECB and euro zone led by Germany and France will ‘do what they have to do.’

And Cooperman also has a 4th tenant - thought the jury is still out of this one.

4. He's hoping the President will move to the center and soften his anti-business and anti-wealth attitude.

If you agree with these tenants, Cooperman is fairly clear about the way to play the market. “What are your choices? Hold cash? Buy bonds?” he asks. As far as Cooperman is concerned no way.

” We have about 90 stocks in our portfolio – and we think they’re all extremely attractive or we wouldn’t own them.”

For Sam Hamadeh
No disclosures

For Ken Heinz
No disclosures

For James Gorman
No disclosures

For Leon Cooperman
No disclosures