A Long, Steep Drop for Americans' Standard of Living 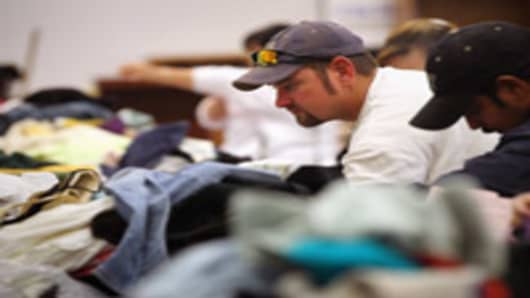 Think life is not as good as it used to be, at least in terms of your wallet? You'd be right about that. The standard of living for Americans has fallen longer and more steeply over the past three years than at any time since the US government began recording it five decades ago.

Bottom line: The average individual now has $1,315 less in disposable income than he or she did three years ago at the onset of the Great Recession – even though the recession ended, technically speaking, in mid-2009. That means less money to spend at the spa or the movies, less for vacations, new carpeting for the house, or dinner at a restaurant.

In short, it means a less vibrant economy, with more Americans spending primarily on necessities. The diminished standard of living, moreover, is squeezing the middle class, whose restlessness and discontent are evident in grass-roots movements such as the tea party and "Occupy Wall Street" and who may take out their frustrations on incumbent politicians in next year's election.

What has led to the most dramatic drop in the US standard of living since at least 1960? One factor is stagnant incomes: Real median income is down 9.8 percent since the start of the recession through this June, according to Sentier Research in Annapolis, Md., citing census bureau data. Another is falling net worth – think about the value of your home and, if you have one, your retirement portfolio. A third is rising consumer prices, with inflation eroding people's buying power by 3.25 percent since mid-2008.

"In a dynamic economy, one would expect Americans' disposable income to be growing, but it has flattened out at a low level," says economist Bob Brusca of Fact & Opinion Economics in New York.

To be sure, the recession has hit unevenly, with lower-skilled and less-educated Americans feeling the pinch the most, says Mark Zandi, chief economist for Moody's Economy.com based in West Chester, Pa. Many found their jobs gone for good as companies moved production offshore or bought equipment that replaced manpower.

The so-called misery index, another measure of economic well-being of American households, echoes the finding on the slipping standard of living. The index, a combination of the unemployment rate and inflation, is now at its highest point since 1983, when the US economy was recovering from a short recession and from the energy price spikes after the Iranian revolution.

In Royal Oak, Mich., Adam Kowal knows exactly how the squeeze feels. After losing a warehouse job in Lansing, he, his wife, and their two children have had little recourse but to move in with his mother. Now working at a school cafeteria, Mr. Kowal earns 28 percent less than at his last job.

He and his wife now eat out once a month instead of once a week, do no socializing, and eat less expensive foods, such as ground chuck instead of ground sirloin. "My mom was hoping her kids would lead a better life than her, but so far that has not happened," says Kowal.

With disposable incomes falling, perhaps it's not surprising that 64 percent of Americans worry that they won't be able to pay their families' expenses at least some of the time, according to a survey completed in mid-September by the Marist Institute for Public Opinion. Among those, one-third say their financial problems are chronic.

"What we see is that very few are escaping the crunch," says Lee Miringoff, director of the Marist Institute in Poughkeepsie, N.Y.

Income loss is hitting the middle class hard, especially in communities where manufacturing facilities have closed. When those jobs are gone, many workers have ended up in service-sector jobs that pay less.

"Maybe it's the evolution of the economy, but it appears large segments of the workforce have moved permanently into lower-paying positions," says Joel Naroff of Naroff Economic Advisors in Holland, Pa. "The economy can't grow at 4 percent per year when the middle class becomes the lower middle class."

He would get no argument from Jeff Beatty of Richmond, Ky., who worked in the IT and telecommunications businesses for most of his career – until he hit a rough patch. He and his wife are living on his unemployment insurance benefits (which will run out in months), his early Social Security payments, and her disability payments from the Social Security Administration. Their total income comes to $30,000 a year.

"Our standard of living has probably declined threefold," he says.

Mr. Beatty, who used to make a comfortable income, now anticipates applying for food stamps. He and his wife have sold much of their furniture, which they no longer need because they have moved into a one-bedroom apartment owned by his sister-in-law.

Even people with college degrees are feeling the squeeze. On a fall day, Hunter College graduate and Brooklyn resident Paul Battis came to lower Manhattan to check out the Occupy Wall Street protest. He tells one of the protesters that America's problem is the various free-trade pacts it has approved.

Mr. Battis's angst over trade is rooted in the fact that two years ago he lost his data-entry job with a Wall Street firm that decided to outsource such jobs to India.

When he had the job, he made a comfortable income. Now his income is sporadic, from the occasional construction job he lands. He used to buy clothing from Macy's or other department stores. Now he goes to Goodwill or Salvation Army stores. He has even cut back on taking the city subways, instead riding his bicycle. Separated from his wife and his 15-year-old daughter, he says, "Try making child support payments when you don't have a regular income. I'm constantly catching up."

Even recently some Americans could tap the equity in their homes or their stock market accounts to make up for any shortfalls in income. Not anymore. Since 2007, Americans' collective net worth has fallen about $5.5 trillion, or more than 8.6 percent, according to the Federal Reserve.

The bulk of that decline is in real estate, which has lost $4.7 trillion in value, or 22 percent, since 2007. In Arizona, for example, more than half of homeowners live in houses that are worth less than their purchase prices, according to some reports.

Stock investments aren't any better. Since 1999, the Standard & Poor's index, on a price basis, is off 17 percent. It's up 3.2 percent when dividends are included, but that's a small return for that length of time.

"This is really a lost decade of affluence," says Sam Stovall, chief investment strategist at Standard & Poor's in New York.

Among those who have watched their finances deteriorate are senior citizens.

"Given the stock market, they are very nervous," says Nancy LeaMond, executive vice president at AARP, the seniors' lobbying group. "They want to keep their savings."

But Ms. LeaMond also notes that about 2 in every 3 seniors are dependent not on Wall Street but on Social Security. The average annual income for those over 65 is $18,500 a year – almost all of it from Social Security, she says. "This is not a part of America that is rich," she says.

At the same time, seniors are getting pinched in their pocketbooks.

"Our members are watching all the things they have to buy, especially health-care products, go up in price," says LeaMond.

In Pompano, Fla., some stretched seniors end up at the Blessings Food Pantry, which is associated with Christ Church United Methodist.

"We have quite a few grandparents who are raising their grandchildren on a fixed income, feeding them and buying clothes for them when they can't afford to do [that for] themselves," says Yvonne Womack, the team leader.

Others, she says, are forgoing food to pay for their medical prescriptions. "And then there is your ordinary senior whose Social Security [check] has not gone up in the last several years, but food and gasoline [prices] have skyrocketed," she says. (However, Social Security checks will go up 3.6 percent in January.) The Blessings, she notes, is now feeding 42 percent more people than last year. "We also provide food you can eat out of a can," she says. "We do have seniors who are living on the streets."