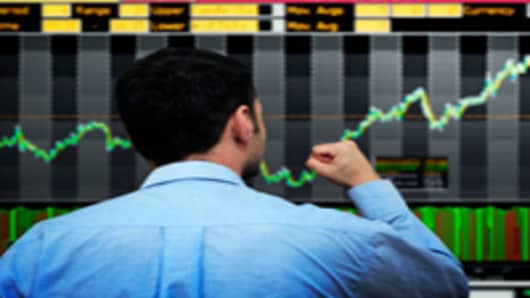 The Russell 2000, up 5.3 percent Thursday, outpaced the market's overall gains and was the last of the four major stock market indices to close above resistance.

Investors were buying into the index and the small cap group, sending the iShares Trust Russell 2000 ETF more than 5 percent higher, as the broad market rallied on the European debt plan.

The Russell closed at 760, above the key resistance level of 737.

Credit Suisse small and mid cap strategist Lori Calvasina said she thought the market's move this past Monday was important since the Russell broke through 728, a level it hasn't been at since late August. "I think (Monday) was definitely an important day because we broke through the top end of that range that we've been in since August," said Calvasina. "I think that was really important psychologically."

"I definitely sensed a worry from small-cap long-only guys that we would take off in the fourth quarter and they wouldn't be prepared, and they would have to chase. That's been the number one fear for the last couple weeks, and that's basically because they aren't positioned for a rally like this," added Calvasina.

Paul LaRosa, chief market technician with Maxim Group said Thursday that he was waiting to see the Russell 2000 follow the Nasdaq, Dow and S&P 500 in confirming the market's bullish trend. The Dow broke resistance at 11,716 last week, and the S&P 500 broke it when closed above 1230 on Friday.

"I do think it's real. I do think we've started to see a turn here. I would not be surprised if we pulled back a bit, but this time dips should be purchased. We've been seeing signs for about a month now. October 4 was the key day. Things have really improved technically since then," LaRosa said earlier this week.

In an interview Thursday, he said he was now watching a level of 770, where the Russell could run into resistance, but that his target is now 840. His Dow target is 12,700.

"All four indices have now structurally completed a base, and are projected to move higher," he said.

But LaRosa also expects to see a near term pullback. "But from this point through the rest of the year, the market should be bought on dips," said LaRosa.

"In my research, I need to see all four indices move in the same direction...You're at the top of the range and three of the four closed above their resistance except for the Russell. If that doesn't close above it in the next couple of days, it could lead to a negative divergencey, and you'd have a sell off," said LaRosa.

For the best small cap performers from Oct. 3 to Oct. 24, take a look below.