Is China Bouncing Back, Or Not?

Materials stocks took a hit on Tuesday after the latest manufacturing data out of China showed the nation’s official PMI fell to the lowest level since February 2009.

However last week another measure of PMI from HSBC showed something else entirely – that China’s economy was expanding.

Considering the contradictory economic data, how should you play it?

Trader Steve Cortes is bearish, He thinks last week’s economic data from HSBC was the outlier - that is the one good reading amid a slew of terrible data. In fact he's surprised the market gave it so much weight. 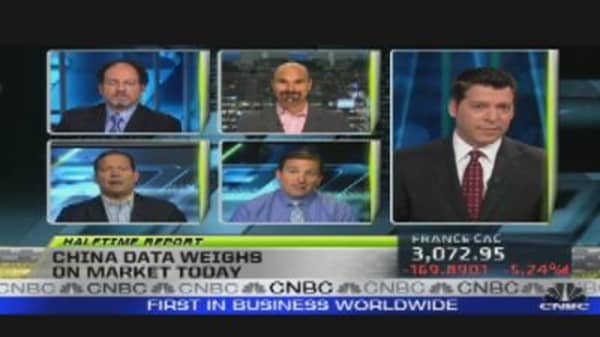 He adds that if Europe is in crisis, the ripple bodes poorly for China, the EU’s largest trading partner.

If you’re looking for a trade, Cortes is a short seller of EM.

Trader Zach Karabell is on the other side.

If you have a longer time horizon, he thinks what matters most is the vast development underway in China. He believes it will fuel a global bull market for quite some time. "That's good for global companies," he says.

Trader Jon Najarian agrees with Karabell. He thinks China’s increasing need for materials, as well as energy and commodities is long-term bullish.

Trader Brian Kelly is somewhat in the middle. Rather than the conflicting PMI numbers he thinks developments in Europe will be key. “If Europe implodes a hard landing is back on the table -- for everyone.”

For Rebecca Pattersson
No disclosures

For Jeff Kilburg
No disclosures

For Jacques Cailloux
No disclosures