A Letter to Joe Paterno: Step Down Today For A Better Tomorrow 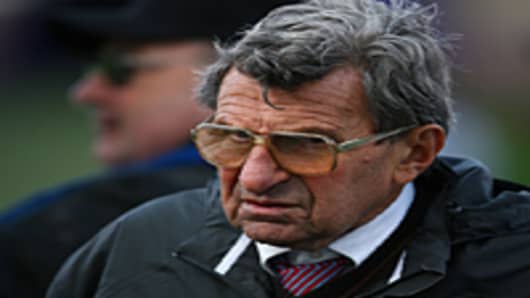 The argument has been made every year: You should step down for the future of Penn State football. But for every bad year, as the hot seat got hotter, you seemingly came back with a better season.

You're a resilient man, we know that. But it's time to get real and pack your bags.

On Wednesday morning, you issued a statement saying you'll retire at the end of the season.

"I have come to work every day for the last 61 years with one clear goal in mind: To serve the best interests of this university and the young me who have been entrusted to my care," you said.

Joe, here's the reality: It's in the best interests of Penn State football and the university for you to not show up to work for another day.

I know, as you wrote this morning, you will spend the rest of your life "doing everything I can to help the university."

Here's how you can help.

Walk away right this minute. After the sexual assault scandal, there's no argument to be made that things will get better for you. Your great contribution to the school in time and money no longer applies.

Schools, as do companies with its CEO, have a hard time letting legends go when it's time from Denny Crum to Bobby Bowden to Bobby Knight. The time never seems right. And it always seemed like you always deserved to call it on your terms more than others.

But Joe, you need to resign now. Not because it's time to resign, but because it would be wrong not to. Going out "on your own terms" now doesn't mean you can say you want to coach the rest of the season. It means resigning now instead of getting fired tomorrow.

Penn State will be able to move on from this, both competitively and financially. Let's not forget, you guys might win the Big Ten this year.

But you have to realize that the easier you make it, the quicker your beloved Nittany Lions can move on from some allegedly horrific crimes that will likely have many more victims come forward. Admit it, at 84, you don't see what we see.

You don't have a Twitter account where you can see the outrage. Trust me, you live in a vacuum. It's time for the people who love you to tell you that if you love Penn State, you have to let them move on immediately.