Viscosity is a measure of the stickiness of oil or put another way, a measure of the degree of slipperiness. The viscosity of the oil trend is determined by a combination of static and dynamic factors. 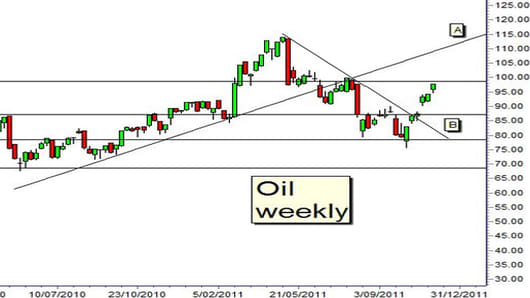 The static factors are provided by the horizontal support and resistance levels. These are static because the market makes constant reference to these levels and the positions of the levels do not change. Every rise and fall in the oil price stumbles over these historical levels.

The dynamic factors are determined by the two trend lines. They are dynamic because the start and end of the trend line depends upon recent and current price activity. The influence of the trend line may continue for an extended period, but it’s not locked in place like support and resistance levels.

The value of this changes – it is dynamic. The combination of static and dynamic features makes the Nymex oil chartinteresting because of the clash of these two forces.

We start with the static forces. These are support/resistance levels at $78, $87 and $98 a barrel. The upper level near $98 has an added complication because it is just below the psychological resistance level at $100. When the oil price is below $100 the volatility and activity is relatively subdued. When the oil price moves above $100 the volatility increases and there is a greater potential for bubble behavior to develop.

Currently the oil price is challenging and testing the $98 to $100 level. A retreat from $98 has well-established support near $87. This retreat is less likely to develop into a consolidation pattern. There is a higher probability the retreat will be minor and temporary prior to a strong test of the $100 resistance level. A breakout above $100 brings the dynamic resistance factors into play.

There are two dynamic features – trend line A and tend line B. The breakout from trend line B signaled the start of the new uptrend. This has the features of a rally with several weeks of strong upward pressure on the weekly chart. It is the retreat from near $100 and the rebound point that will provide the first anchor point for a new uptrend line. Until this develops it is difficult to plot an accurate up trend line.

If a strong breakout were to develop in the next week the price target is near $110. If the breakout above $100 is delayed for several weeks, then the price target is slightly higher, around $115. These breakout projection targets are consistent with the way oil price volatility develops after a move above $100. Price tends to move in $10 to $12 rallies.

The chart suggests there is a high potential for the oil price to consolidate briefly in the $98 to $100 region prior to a strong breakout with initial upside targets provided by the value of the long term trend line A.

Daryl Guppy is a trader and author of Trend Trading, The 36 Strategies of the Chinese for Financial Traders –www.guppytraders.com. He is a regular guest on CNBC's Asia Squawk Box. He is a speaker at trading conferences in China, Asia, Australia and Europe.

If you would like Daryl to chart a specific stock, commodity or currency, please write to us at ChartingAsia@cnbc.com.

CNBC assumes no responsibility for any losses, damages or liability whatsoever suffered or incurred by any person, resulting from or attributable to the use of the information published on this site. User is using this information at his/her sole risk.