Big Investors Redo Portfolios: Should You Do the Same?

If regular investors can take any clues away from the recent moves by the market's big fish, it's that this would be the time to go for the tried and true and not shoot for the big prize. 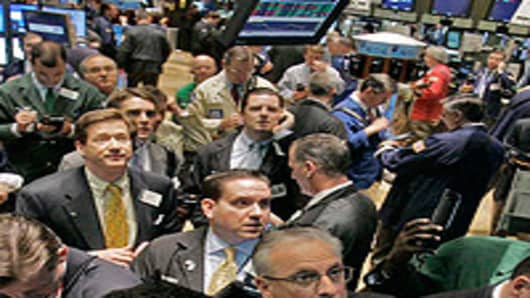 Regulatory filings this weekindicate that so-called whale investors like Warren Buffett, David Tepper and John Paulson took few chances and, in fact, pared back on risk while the global economy weathers a serious debt crisis.

The most-discussed move — Buffett's big stake in International Business Machine — was indicative of how even the guys with the deepest pockets are measuring risk these days.

"A lot of things surprised me," says Dave Rovelli, managing director of US equity trading at Canaccord Adams. "He never really plays technology. For him to finally after all these years go into a technology company, I read it as 1) he sees real value there, which is probably obvious, and 2) he is running out of places to put his money."

The latter comment refers to the inability of investors to generate much yield from government debt. Treasury yields have plungedas the Federal Reserve has entered the bond market both to drive down long-term borrowing rates, and to force investors to put their money elsewhere as bond returns fall.

In the case of IBM , the yield isn't all that impressive at about 1.6 percent. But with the stock up 30 percent over the past year and easily outperforming its peers, it offers some long-term attraction for an ultra-long-term investor like Buffett.

"The problem with Buffett is he basically buys something and falls asleep for 25 years," says Keith Springer, president of Springer Financial Advisory in Sacramento, Calif. "Every investor we know is concerned about today, tomorrow and next week, and nobody has the patience that Warren Buffett has."

Other investors took halting steps: Carl Icahn cut his stake in Clorox but made few other moves; Paulson eased his position in the SPDR Gold Trust exchange-traded fund but is believed to have maintained gold exposure elsewhere, and David Einhorn of Greenlight Capital took a significant stake in Legg Mason.

Yet the movements by Buffettand other big-name market mavens say something about investor sentiment, which appears to have shifted from snapping up beaten-down names to looking for those that will provide value and solid, if unspectacular, returns.

"It tells you exactly what the market's been saying — old school tech, the older players in tech are starting to make moves to the upside because people want to make moves in big, liquid names," Rovelli says. "They want to be in the tech names so they can get in and get out."

Similarly, Tepper's move out of financial stocks — and a significant paring in equities overall — sends a message about how big money is viewing the fallout from intensified banking regulation and financial exposure to the European debt crisis.

Some credit Tepper for sparking a rally in September 2010 when he said, during a CNBC appearance, that the Federal Reserve would use monetary policy to prevent stocks from falling.

This time around, though, investors didn't need a cue from him to get out of financials. The group has been the worst performer on the Standard & Poor's 500 in 2011, with a nearly 19 percent loss, and shows little signs of life even if the broader market does rally.

"What Tepper did with financials — that's still one area that everyone continues to think has so many unknowns," says Ryan Detrick, senior analyst at Schaeffer's Investment Research in Cincinnati. "It probably makes sense to avoid those. If the market rolls over, that's probably the area that leads us lower."

Still, Detrick says he didn't see anything in the so-called 13f reports that indicates an outright bearish bias in the markets.

"We still think it makes sense to be cautiously bullish here," he says. "Don't go overboard, obviously because those Europe concerns are clearly still relevant. The silent accumulation by some of the bigger people we'd call a nice bull point."

One problem with following the 13f statements is that they're somewhat backward-looking in that they only cover through the last quarter. In this case, the investment choices would cover through Sept. 30.

A more recent look at what big investors are doing, from Bank of America Merrill Lynch, shows a similarly slow progression into risk.

In the first half of November, the difference between investors underweight and overweight global stocks slipped from 7 percent to 5 percent, according to the BofAML fund managers survey, which polls 258 experts with $665 billion under management.

The difference of those overweight U.S. stocks rose to 20 percent from 6 percent in October.

That's a healthy switch, though with the market nearly setting a record for a one-month return, there still are signs of hesitation.

"The problem for the average investor is these guys can move very rapidly. You get a look at what they own, but you don't know what they're shorting," says Philip Silverman, principal at Kingsview Capital in New York. "It can be dangerous to just go blindly on what these guys picked up in the last quarter."