US Data Competes With Europe

Car sales, chain store sales and manufacturing data — all things that make the economy run — could lift stocks in Thursday's session, following on the Dow's biggest one-day rally since the bull market began. 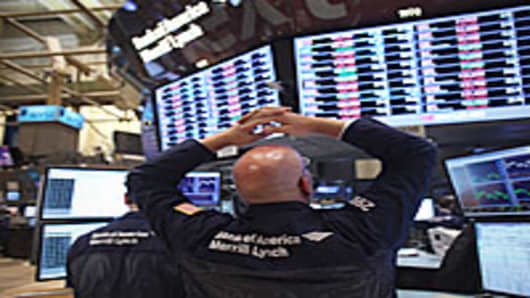 A surprise, coordinated move by the Fed and five other central banks to ease strains in financial markets, along with surprising improvement in U.S. economic reports, drove the Dow Wednesday to 12,045, up 490 points for its best one day gain since March 23, 2009. The S&P 500 rose 4.3 percent to 1,246, its best gain since Aug. 11.

Europe will again be in the foreground Thursday as European officials work to find solutions for the sovereign debt crisis, ahead of next week's EU summit. European Central Bank President Mario Draghi briefs the European parliament Thursday on the ECB's annual report, and Spain and France hold bond auctions.

But Friday's monthly employment report swings some focus back to key U.S. data, including weekly jobless claims at 8:30 a.m. EST and the 10 a.m. ISM manufacturing survey, watched both for what it says about manufacturing activity and jobs.

There are also chain store sales for November, which should reflect strong Black Friday sales, and monthly auto sales. Credit Suisse economist Jonathan Basile said he expects the November car sales to show a seasonally adjusted annual sales rate of 13.4 million. "Without that cash for clunkers month in 2009, it would be the best reading in three years," he said.

Basile on Wednesday raised his forecast for Friday's November payrolls to 170,000 from 130,000 after ADP's private sector report showed 206,000 jobs were added in November.

While some economists dismiss ADP, Basile said it supports other signs of improvement in jobs-related data. The consensus estimate is that 125,000 jobs were added in November and the unemployment rate was unchanged at 9 percent.

Stocks soared, the euro rose, credit spreads narrowed, and commodities gained Wednesday after the central banks moved to ease strains in the interbank lending market and make dollars loans more available, particularly to European banks. As of next Monday, the central banks are lowering the cost of existing dollar swap loans, or temporary loans to banks, by a half percent and they will extend the program to February 2013.

"It clearly decreases the risk of really big disruptions in the short term," said Goldman Sachs economist Andrew Tilton. "...There has been a lot of different signs of dollar funding pressure, and this basically decreases the cost of dollar funding for foreign banks and probably encourages those banks to seek funding from their respective central banks. On the margin, that would tend to alleviate near term liquid issues."

But it does not solve the sovereign debt problems, nor does it necessarily spill over to help the economy. While the stock market rallied, the bond market had a muted response, with the yield on the 10-year rising to 2.065 percent.

"We're greasing the wheels of liquidity, making it cheaper for banks to access funding, but not necessarily alleviating the need for them to access funding. The problem is we still have all these uncertainties. Today was a bright ray of sunshine, but it wasn't enough to break through the clouds," said John Briggs, senior Treasury strategist at RBS.

Several stock market strategists said the central bank action may have launched a year-end Santa rally, but they were skeptical it would be long lasting.

Birinyi Associates reports the S&P 500 has finished up more than 3 percent nine times since the start of 2010. The market opened lower the next day six of the last eight times. But the S&P ended the day positive 75 percent of the time.

"For the market to have a sustainable rally, you need to have a true resolution to this (sovereign debt) issue. This is going to hang like a pall over the market until it's resolved. This doesn't resolve it," said Steve Massocca of Wedbush. "I think stocks can go higher. We could go... another 50 points on the S&P. Are we going to break out to new highs here? I don't think so."

Even before the announcement from central banks Wednesday, China started stock markets moving higher when it said it would reduce the reserve requirements for its banks in order to spur economic activity. Markets will also digest the country's official PMI data, which showed the factory sector shrinking for the first time in November in nearly three years.

Earnings are expected before the bell from Barnes and Noble , Kroger , Lululemon Athletica and Toronto Dominion Bank . H&R Block reports after the close.

There's a Senate Homeland Security and Governmental Affairs Committee hearing on insider trading and Congressional accountability. The hearing will examine whether new laws are needed prohibiting members of Congress and their staffs from trading on information obtained by lawmakers and their staff.

The Treasury holds the first day of a two-day event, hosted by Treasury's Office of Financial Research and the Financial Stability Oversight Council to discuss issues in assessing, monitoring and mitigating threats to financial stability. Treasury Secretary Tim Geithner speaks to the media at 4:25 p.m. Also participating are Martin Gruenberg, Acting Chairman FDIC, and Gensler.