Futures slipped after briefly spiking Thursday as comments from ECB's Mario Draghi appearing to step back from the idea of aggressive bond buying trumped the positive jobless claims news.

Investors also remained cautious ahead of a crucial summit of European leaders at the end of the week.

The European Central Bank's President Mario Draghi said he didn't signal more bond purchases last week in a press conference following an interest rate decision, implying that he has stepped back from the idea of aggressive bond buying from the ECB.

This comes after the ECB slashed its main interest rate as the euro zone's worsening debt crisis outweighed the concern over persistently high inflation.

Expectations for a deal on a lasting solution to the euro zone debt crisis are high, but were tempered on Wednesday by comments made by a German official who said he was pessimistic about an agreement being reached.

French President Nicolas Sarkozy and German Chancellor Angela Merkel are set to meet in Marseilles, France where Sarkozy is due to make a speech at the congress of Europe’s center-right leaders.

He and Merkel are both due to hold bilateral meetings later with Spanish Prime Minister-elect Mariano Rajoy before they head to Brussels where EU leaders meet for dinner tonight and kick off the heavily-anticipated EU summit.

Weekly claims for jobless benefits tumbled 23,000 to a seasonally-adjusted 381,000, according to the Labor Department, the lowest in almost nine months. Economists surveyed by Reuters had forecast claims slipping to 395,000. 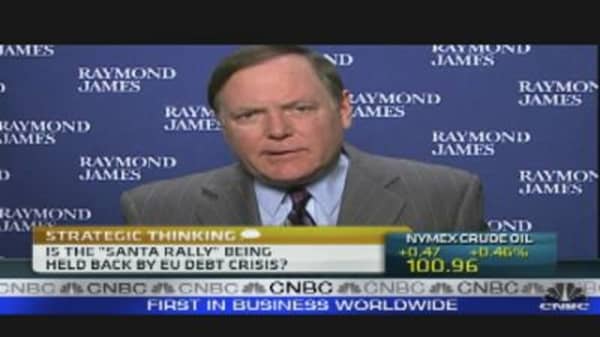 McDonald's rallied after the fast-food giant posted a bigger-than-expected gain in November same-store sales, helped by big gains in Asia and Europe.

And Smithfield Foods reported results that topped estimates, thanks to strong exports.

Meanwhile, IBM said it will acquire DemandTec for $13.20 a share in cash. The acquisition will help IBM boost its cloud-based service.

On Tap This Week: