Stocks added to declines in the final minutes of trading to log a sharp loss Thursday after Germany rejected some of the EU summit draft measures and as ECB President Mario Draghi's comments dashed hopes that the central banks would raise its bond purchases of debt-ridden European nations.

The Dow Jones Industrial Average erased 198.67 points, or 1.63 percent, to close at 11,997.70, led by JPMorgan and BofA , snapping a three-day winning streak and ending below the psychologically-important 12,000 level.

The CBOE Volatility Index, widely considered the best gauge of fear in the market, closed above 30.

All 10 S&P sectors ended in negative territory, led by financials and materials.

According to the leaked EU summit draft, euro zone leaders were determined to move towards a "new fiscal compact" and strengthen bailout mechanisms, Reuters reported. However, Germany quickly rejected the draft measures, including giving the European Stability Mechanism (ESM) a banking license and issuing common euro zone debt, according to Reuters, citing a senior German official.

Investors have been heavily focused on the summit all week, which kicked off with a working dinner and is scheduled to continue through Friday. EU leaders will aim to agree on a plan to assuage the crisis.

“We may see a short-term rally on the bark, but I’m skeptical that the [EU summit resolution] will have a bite—there are so many divergent perspectives that it’s very unrealistic to get a complete package that satisfies all parties,” said Jay Wong, portfolio manager of the Payden Value Leaders Fund. 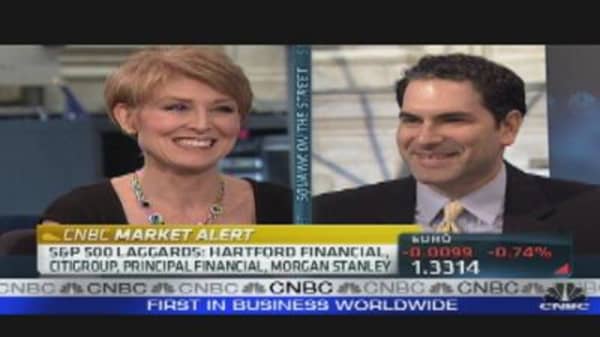 Earlier, investors were disappointed after ECB President Mario Draghi said he didn't signal more bond purchaseslast week in a press conference following an interest rate decision, implying that he has stepped back from the idea of aggressive bond buying from the ECB.

“We were definitely caught off guard with how dramatically Mario Draghi walked back from what was clearly a statement in support of bond markets with respect to the ECB,” said Dan Greenhaus, chief global strategist at BTIG.

On the economic front, weekly claims for jobless benefits tumbled 23,000 to a seasonally-adjusted 381,000, according to the Labor Department, the lowest in almost nine months.

Meanwhile, wholesale inventories rose in October, posting its biggest gain in five months, according to the Commerce Department.

Former MF Global chief Jon Corzine testified to a House panel, saying that he doesn't know the location of client money that went missing and that he inherited a firm doomed by the risks his predecessors took. MF Global collapsed in late October after making huge bets on European sovereign debt.

Among earnings, Costco posted higher quarterly profit in its first quarter. And Smithfield Foods reported results that topped estimates, thanks to strong exports.

Ford pared sharp losses after the automaker reinstated a dividendof 5 cents a share, its first time in five years. Meanwhile, Tesla slumped after Morgan Stanley cut its rating on the electric car maker to "underweight" from "overweight."

On the M&A front, IBM said it will acquire DemandTec for $13.20 a share in cash. The acquisition will help IBM boost its cloud-based service.

On Tap This Week: