In a year when the Standard & Poor's 500 Index may close below the forecasts of every single equity strategist, Deutsche Bank's chief U.S. equity strategist Binky Chadha's call that the S&P 500 would close 2011 at 1550 points was most off the mark, according to data compiled by Bloomberg.

Chadha's optimism underappreciated how an escalating European debt crisis and political gridlock in Washington would curb investor risk appetite. The forecast, which was 13 percent too rich at April's stock peak and is now 25 percent too optimistic, correctly estimated corporate earnings, but mistook the premium investors would pay for them. 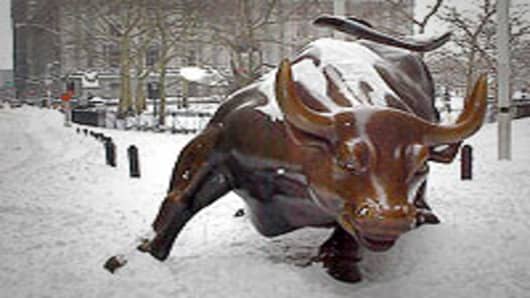 As a result, the sector pair trades he recommended were off base — such as buying energy stocks over materials, industrials over utilities and financials over consumer staples. The materials and utilities sectors more than doubled their earnings, while financials suffered. A call to buy the tech sector over telecoms bore fruit, however.

Chadha came into 2011 expecting that the S&P 500 would add to an 11 percent annual gain in 2010 by posting an over 21 percent gain in 2011. Instead, the index is on track to fall, the first drop since the onset of the financial crisis.

The problem is that while companies are growing and Federal Reserve policies are bolstering inflation, neither factor is pushing investors into equities or adding to jobs and economic growth. Instead, earnings are increasing, while economic growth and stock premiums fall.

To get to a year-end forecast of 1550 S&P points, Chadha estimated that companies within the index would earn $96 a share — and that the multiple that investors pay for stocks would rise 25 percent to 16.4 times earnings. That multiple's fallen nearly 13 percent to 13.1 times earnings, causing stocks to fall even as earnings rise.

Another problem for Chadha wasn't that he was railroaded by unexpected events like the Arab Spring or the tsunami in Japan. Instead, he misjudged non-financial risks to the economy.

In his forecast for 2011, Chadha expected jobs and credit growth, in addition to better than expected earnings and economic data. All of that happened. Stocks weathered a spike in oil prices, unexpected protests and natural disasters, holding near 2011 highs through mid-July.

Nevertheless, Chadha underestimated the risks posed by U.S. politics and the European crisis, which escalated in August.

"The necessary condition for a move toward the center in policy making after the elections has been satisfied and in our reading a move in this direction has already begun," Chadha said about the U.S. Congress entering 2011. Instead, the government has been close to shutting down multiple times, it's failed to reach agreements on key stimulus policies and came within hours of being unable to pay its bills in August.

Meanwhile, across the Atlantic, the political situation was potentially worse. An escalating crisis has hit the credit ratings of virtually all European nations and many of the region's largest banks. While Deutsche Bank is plugged into the daily dealings in Europe, Chadha completely misread the situation.

"Our baseline is that the crisis remains confined to the periphery and that the euro area authorities will deliver and do what is necessary to resolve it. It is however unlikely that they will do so preemptively," wrote Chadha.

Instead, yields rose, key countries Italy and Spain fell into the debt crisis and the solvency of major banks came into question.

Going into 2012, Deutsche Bank is sticking with its optimism. It expects that earnings-per-share for the S&P 500 will end the year at $106; meanwhile, an earnings multiple of 14 will push the index to 1500 points by 2012. "We see very healthy corporate fundamentals, extremely cheap valuations and a strong demand-supply balance eventually winning out against the concerns about the risks and target 1500 by year end," writes Chadha in a December report outlining his expectations for next year.

If Chadha got his multiple multiplication all wrong in 2011, signs are beginning to point to a better 2012. Currently, every equity strategist polled by Bloomberg expects that S&P earnings per share will exceed $100, up from a 2011 mean expectation of $92.33. However, those same strategists expect that the index will end the year at 1348 points, down from 2011 end of year expectations of 1371. It means that the earnings multiples of even bullish strategists are falling.

In 2011, Chadha notes that earnings multiples fell near 12, the lowest equity premiums recorded since the crisis. In his 2012 forecast Chadha, believes that investors are discounting, GDP growth, positive economic data, 11 consecutive quarters of earnings beats and increasing dividend payouts because they see the data as "unsustainable." Cutting against such pessimism Chadha says, "the divergence between the multiple and that indicated by its historical drivers is at an extreme, suggesting that absent the realization of tail risks, at some point a re-rating will happen."

Still, risks remain even if the euro zone isn't going to unravel in 2012. "High dividend [stocks] are overvalued," writes Chadha adding, "We want to avoid stocks with high exposure to Europe... and the government." Like in 2011, the expectation is that corporations can survive continued debacles, slowdowns and uncertainty emanating from governments and their finances.

Still, 2012 will be all about the risk tolerance investors will have as inflation potentially eats away at haven assets and some look to catch corporate earnings growth. "In our view, earnings will grow by 7% in 2012. With the market trading at a multiple on 2011 earnings of 12.7x, around the March 2009 lows, and fair value 30% higher, equity returns clearly hinge critically on what happens to the multiple in 2012," writes Chadha.