Elections Could Change the Game in Europe in 2012

There was a wide-ranging change of the guard in Europe in 2011, as struggling countries brought in the technocrats, or voted out administrations which had failed to solve their economic crises. 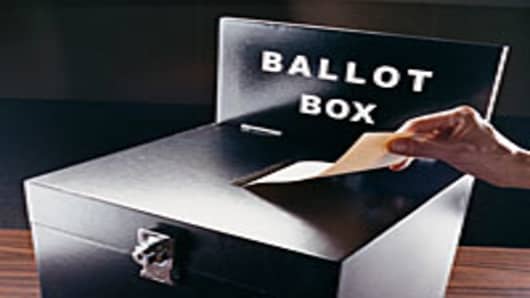 In 2012, there could be an even bigger shift, with several key countries facing possible changes at the top.

France, the euro zone’s second-largest economy, will hold presidential elections on April 22 and May 6, followed by general elections in June. President Nicolas Sarkozy, who with German Chancellor Angela Merkel has led the euro zone’s response to the debt crisis, is facing a challenge from Socialist party candidate Francois Hollande.

“Hollande has a different perspective on Europe to Sarkozy,” he said.

He warned that, while Hollande is relatively moderate, there is growing strength on the extreme left wing of his Socialist party – as shown from the surprisingly good performance of candidate Arnaud Montebourg in the primaries.

Hollande has promised to “renegotiate the [European Union] agreement to put what it lacks today” and said he would push to include European Central Bank intervention and a new euro bond – both measures opposed by Germany. He has also stated that he would not vote for the balanced budget part of the agreement, which has to be implemented at the national level.

“I don’t see how he could reverse Sarkozy’s pension reforms and make a balanced budget,” Newton said.

Disagreement between the euro zone’s two largest powers could be disastrous at this point.

“This could cause a serious setback for the political process in Europe, and after years with Merkozy’s intensifying leadership it could become rather uncomfortable for the financial markets to watch a Hollande publicly showing that he is very much in disagreement with German Chancellor Angela Merkel on several accounts,” analysts at Danske Bank wrote in a note.

There are also elections in Greece scheduled for February, where the ruling government, led by Lucas Papademos after a surprise change in late 2011, could face a nasty shock. With protests continuing in Athens, there are concerns that support for anti-euro parties may grow.

The worst-case scenario would be if the Mediterranean country had a disorderly default on its debt and didn’t exit the euro , according to Newton.

Of course, these are just the elections on the agenda so far. Several major European countries could have snap elections if the destabilizing effects of the euro zone debt crisis continue, Newton believes.

“There’s a possibility of a snap election in the UK if the coalition falls apart,” he warned.

“If you look at the package agreed, there’s a high probability of harmful financial regulation being enforced as a result, which would cause the Tory right-wing to demand a referendum on European Union membership. This would cause the coalition to fall apart.”

The UK refused to join the latest euro zone agreement, as European Union leaders did not yield to Prime Minister David Cameron's request that the country's financial district, the City, be protected from a proposed tax on financial transactions.

Newton believes that Cameron could win a majority by running on the issue of UK sovereignty, but thinks that he will try to avoid a collapse of the coalition.

There is also a chance that Italy will have a new election, which could kick out thecurrent technocratic government, if President Giorgio Napolitano fails to reverse former Prime Minister Silvio Berlusconi’s electoral reforms of 2005. Berlusconi still controls the Senate. Elections are not due until April 2013, but Italian politics are famously unpredictable.

Outside Europe, there is a small chance of a snap election in Israel, according to Newton. There will also be elections in Egypt and Libya following the Arab Spring – and the Iranian elections in March could put an end to the power struggle between President Mahmoud Ahmadinejad and Supreme Leader Ali Khamenei, supported by his son Mojtaba Khamenei.