WASHINGTON — When Representative Ed Pastor was first elected to Congress two decades ago, he was comfortably ensconced in the middle class. Mr. Pastor, a Democrat from Arizona, held $100,000 or so in savings accounts in the mid-1990s and had a retirement pension, but like many Americans, he also owed the banks nearly as much in loans. 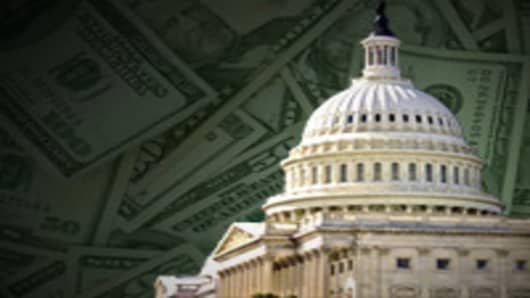 US Capitol Building with cash

Today, Mr. Pastor, a miner’s son and a former high school teacher, is a member of a not-so-exclusive club: Capitol Hill millionaires. That group has grown in recent years to include nearly half of all members of Congress — 250 in all — and the wealth gap between lawmakers and their constituents appears to be growing quickly, even as Congress debates unemployment benefits, possible cuts in food stamps and a “millionaire’s tax.”

Mr. Pastor buys a Powerball lottery ticket every weekend and says he does not consider himself rich. Indeed, within the halls of Congress, where the median net worth is $913,000 and climbing, he is not. He is a rank-and-file millionaire. But compared with the country at large, where the median net worth is $100,000 and has dropped significantly since 2004, he and most of his fellow lawmakers are true aristocrats.

Largely insulated from the country’s economic downturn since 2008, members of Congress — many of them among the “1 percenters” denounced by Occupy Wall Street protesters — have gotten much richer even as most of the country has become much poorer in the last six years, according to an analysis by The New York Times based on data from the Center for Responsive Politics, a nonprofit research group.

Congress has never been a place for paupers. From plantation owners in the pre-Civil War era to industrialists in the early 1900s to ex-Wall Street financiers and Internet executives today, it has long been populated with the rich, including scions of families like the Guggenheims, Hearsts, Kennedys and Rockefellers.

But rarely has the divide appeared so wide, or the public contrast so stark, between lawmakers and those they represent.

The wealth gap may go largely unnoticed in good times. “But with the American public feeling all this economic pain, people just resent it more,” said Alan J. Ziobrowski, a professor at Georgia State who studied lawmakers’ stock investments.

There is broad debate about just why the wealth gap appears to be growing. For starters, the prohibitive costs of political campaigning may discourage the less affluent from even considering a candidacy. Beyond that, loose ethics controls, shrewd stock picks, profitable land deals, favorable tax laws, inheritances and even marriages to wealthy spouses are all cited as possible explanations for the rising fortunes on Capitol Hill.

What is clear is that members of Congress are getting richer compared not only with the average American worker, but also with other very rich Americans.

Going back further, the median wealth of House members grew some two and a half times between 1984 and 2009 in inflation-adjusted dollars, while the wealth of the average American family has actually declined slightly in that same time period, according to data cited by The Washington Post in an article published Monday on its Web site.

With millionaire status now the norm, the rarefied air in the Capitol these days is $100 million. That lofty level appears to have been surpassed by at least 10 members, led by Representative Darrell Issa, a California Republican and former auto alarm magnate who is worth somewhere between $195 million and $700 million. (Because federal law requires lawmakers to disclose their assets only in broad dollar ranges, more precise estimates are impossible.)

Mr. Issa, for instance, has faced outside scrutiny because of the overlap of his Congressional work and outside interests, including extensive investments with Wall Street firms like Merrill Lynch and Goldman Sachs, as well as land holdings in his San Diego district. In one case, he obtained some $800,000 in federal earmarks for a road-widening project running along his commercial property.

Senator John Kerry, a Massachusetts Democrat who is married to Teresa Heinz Kerry, set off an uproar last year when it was disclosed that he had docked his $7 million, 76-foot yacht not in his home state but in neighboring Rhode Island, which has no sales or use tax on pleasure boats. (Mr. Kerry, worth at least $181 million, voluntarily paid $400,000 in Massachusetts taxes after criticism.)

Representative Nancy Pelosi, the House Democratic leader, was challenged about her wealth, as much as $196 million, by a member of her own party a few weeks ago. Representative Laura Richardson, a California Democrat who is among the poorest members of Congress with as much as $464,000 in debt, attacked Ms. Pelosi at a closed-door Democratic caucus meeting for endorsing a Congressional pay freeze, according to a report in Politico that was confirmed by other members. 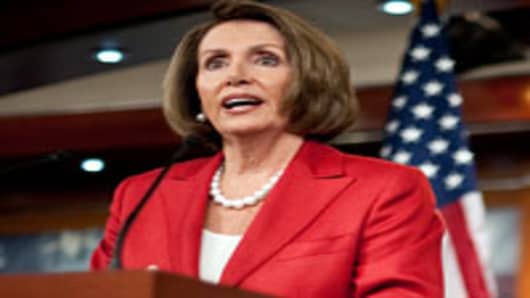 Ms. Richardson angrily told Ms. Pelosi that, unlike her, some members needed the raise. Members now make a base pay of $174,000 and would automatically get a cost-of-living adjustment unless they were to decide, for a third straight year, to pass it up. Sheila Krumholz, executive director of the Center for Responsive Politics, said the rising Congressional wealth fuels public doubts about whether members are more focused on their constituents’ interests or their own investment portfolios.

“There’s always a concern that they can’t truly understand or relate to the hardships that their constituents feel — that rich people just don’t get it,” she said.

In an effort to gauge how directly the country’s economic problems affected lawmakers, The New York Times contacted the offices of the 534 current members (one seat is vacant) for an informal survey. It asked if they had close friends or family members who had lost jobs or homes since the 2008 downturn.

Half the respondents said they had close friends or relatives who lost homes, while the other half said their personal contact was limited to constituents who came for help.

Two-thirds said they had close friends or relatives who had been laid off or had shut down a business during the downturn. The rest knew no one in that category personally.

Representative Anna G. Eshoo, a California Democrat who took part in the survey, said several cousins in their 40s and 50s whom she considers brothers and sisters lost their jobs recently. Without college degrees, none have found work, and they have emphasized to her the importance of unemployment benefits.

“Personal stories are very powerful because it’s not a theory,” Ms. Eshoo said. “It’s not talking points of a party. These are people experiencing the harshness of what is an economic depression for them.”

Multimillionaires in Congress “view life through a different lens,” she said.

Ms. Eshoo herself has escaped the worries weighing on her cousins. While she reported being in debt in 2004, she is now worth an estimated $1.8 million, her financial reports show. She said the rise came mostly from the sale of a family home where she lived for 40 years.

“I was fortunate,” she said. “I’ve lived from paycheck to paycheck most of my life, and I’m a single mother.”

One likely cause of the rising wealth, political analysts say, is the growing cost of a political campaign. A successful Senate run cost on average nearly $10 million last year, and a successful House race was $1.4 million, significantly above past elections.

The prohibitive cost has inevitably drawn richer candidates who can help bankroll their own campaigns and attract donations from rich friends — while deterring less well-off candidates, political analysts say.

The data analyzed by The Times corroborated the idea that incoming members are in fact richer than those in the past. The freshman class of 106 members elected last year, including many Tea Party-backed Republicans, had a median net worth of $864,000 — an inflation-adjusted increase of 26 percent from the 2004 freshmen.

Once in Congress, members benefit from many financial perks unavailable to most Americans. Beyond a base salary of $174,000 — an increase of about 10 percent since 2004, somewhat less than inflation — members get extra pay for senior posts and generous medical and pension benefits, as well as accouterments of power often financed by taxpayers or their campaigns.

While the housing collapse nationwide has hurt many Americans, lawmakers still find the real estate sector the most popular place to park their money, statistics from the Center of Responsive Politics show, and members of Congress continue to profit from their investments there. Perhaps the most tantalizing but hotly debated factor in the rising wealth of Congress is lawmakers’ performance in the stock markets — and the question of whether they are using their access to confidential information to enrich themselves.

In a study completed this year, Mr. Ziobrowski at Georgia State and his colleagues found that House members saw the stocks they owned outperform the market by 6 percent a year. Their research from several years ago found that senators did even better, at 12 percent above average. The researchers attributed the performance to a “significant information advantage” that lawmakers hold by virtue of their positions and the fact they are not bound by insider-trading law.

However, a separate study last year by researchers at Yale and the Massachusetts Institute of Technology found that the portfolios of lawmakers actually performed somewhat worse than average investors. It found that members did do better when investing in companies in their home districts or associated with campaign donors — suggesting that they benefited from their political connections — but still not as well as the average investor.

While concerns go back decades about lawmakers trading on confidential information, the issue drew renewed attention with a new book on the topic, “Throw Them All Out” by Peter Schweizer, and a “60 Minutes” report in November. Both linked high-level briefings that Congressional leaders received on the 2008 financial crisis and on health care to their purchase and sale of certain stocks.

Members insisted that they never traded on information that was not public, and some Congressional leaders pointed out that their investments were in blind trusts managed by professional advisers. Nonetheless, the publicity led some 90 members of Congress to call anew for a ban on insider trading.

Mr. Pastor, the Arizona congressman, said he never relied on fancy stock investments to make money. He said the key to his good fortune was watching what he spends, paying off debts and, at age 68, collecting Social Security and a pension from his days as a county supervisor.

“I don’t see myself as a man of great wealth,” he said. “To say that I’m enjoying a millionaire’s lifestyle — well, I can tell you, I guess a millionaire’s income doesn’t go very far these days.”