Despite RIM Takeover Talk, Hurdles Would Be High

For beleaguered investors in Research in Motion, the drastic collapse of the company’s share price through 2011 eventually became a cause for optimism. In December, shares of the BlackBerry maker spiked on reports that several technology titans could be suitors. 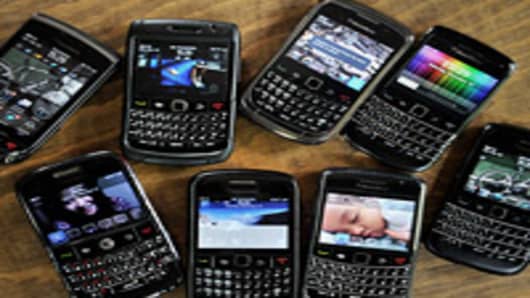 But the optimism has been fleeting; the company has grappled with service failures, weak product introductions and dwindling market share. Shares of RIM have dropped by 75 percent since February.

As the troubles mount and the stock drops, RIM is looking like a strong takeover candidate without suitable prospects.

“Before you talk about a buyer, you have to ask: do you have a seller?” said Colin Gillis, an analyst at BGC Partners in New York. “That is the overarching question.”

Any potential suitors would most likely face stiff resistance from Jim Balsillie and Mike Lazaridis, the co-chief executives. Collectively they own more than 10 percent, which makes them among the largest shareholders.

RIM is also a point of pride for the Canadian government, which has been increasingly reluctant to let foreign companies buy major domestic corporations. In a recent news conference, Stephen Harper, the Canadian prime minister, offered a note of support for RIM, saying “we all know this is an important Canadian company.”

RIM, which is based in Waterloo, Ontario, said it does not comment on “rumors and speculation” as a matter of policy.

Despite the company’s well-publicized problems, RIM remains an attractive target. Even as its market share erodes in North America, the company continues to expand its customer base overseas and now reports almost 75 million users worldwide. And the BlackBerry brand is the first choice for security-conscious users like law enforcement agencies and financial services companies. In the first nine months of the year, RIM reported earnings of $1.29 billion. 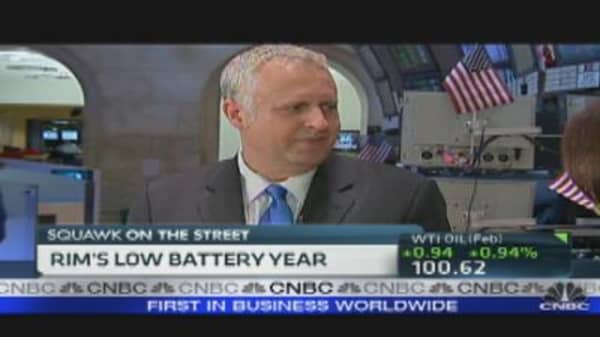 At Wednesday’s close of $14.87, the price is also appealing. Alkesh Shah, an analyst at Evercore Partners, estimated that the company was worth closer to $22.50 a share, even assuming that the handset business is essentially worthless. Mr. Shah said that RIM’s network, which carries global traffic worldwide and generates monthly subscription fees, was worth about $12.50 a share, while he valued the company’s patents at roughly $7.50 a share. The company also has $2.50 a share in cash, he estimated.

Still, RIM is a large acquisition to swallow, limiting the pool of buyers.

“You have to remember that this would take $10 billion, $12 billion, $13 billion,” said Mr. Gillis of BGC. “That’s a lot of cash. There’s not a lot of people willing to spend that kind of money.”

The most obvious suitor for RIM would be a Chinese cellphone manufacturer. Such companies, which typically act as contract manufacturers for prominent brands, lack a significant presence outside of Asia. ZTE, for example, is small, low-end player in North America and Europe. But it is the fourth-largest handset maker in the world, according to IDC, a company that tracks technology markets.

With RIM, ZTE would add a recognized brand to its portfolio, reflecting its global ambitions. This year, the Chinese company announced plans to produce high-end phones under its own name, focusing in part on Western markets.

But the regulatory hurdles would be high for a Chinese company. In recent years, Canada has been quick to block acquisitions under its foreign ownership laws. In 2010, the Conservative government stopped BHP Billiton, the Australian mining company, from buying Potash Corporation of Saskatchewan. At the time, some politicians cited a foreign takeover of RIM as a worst-case outcome.

Other potential RIM suitors have been rebuffed. Microsoft, which had previously tried to persuade RIM to adopt its mobile operating system, initiated deal talks this summer, according to one person with knowledge of the matter. The American technology company viewed RIM’s corporate business as a good distribution platform for its software. But discussions withered, as RIM pursued an independent course. Microsoft declined to comment.

Amazon also reportedly explored a RIM acquisition. Peter Misek, an analyst in New York with Jefferies and Company, said such a deal would allow Amazon to add phones to its Kindle line of tablet computers. While no deal materialized, he said that it remained possible that RIM might license its BlackBerry software.

Facebook is a dark horse candidate. Given that Google uses Android to promote its online services, Mr. Misek said that it was likely Facebook would introduce a rival mobile operating system, and RIM would offer Facebook a quick way into the business.

But even that situation is a long shot. RIM is struggling with its latest operating system, BlackBerry 10. An RIM acquisition would also be a costly way for Facebook to gain entry into a new area.

“For $10 billion they could subsidize a lot of Android phones,” Mr. Gillis said of Facebook.

Few deals are likely to pass muster with RIM’s chiefs. Mr. Balsillie and Mr. Lazaridis have remained steadfast in their strategy to reverse the company’s fortunes. The executives are focused on a new line of phone and operating system, which are not expected to be introduced until the end of 2012.

Adnaan Ahmad, an analyst with Berenberg Bank in London, said the pair seemed to have developed “founders’ syndrome,” a condition that makes them inflexible about taking their company in new directions and unwilling to yield control.

Both have reputations for being combative when challenged. In the middle of the last decade, the chiefs vigorously fought a patent case brought by NTP — actions that almost prompted a shutdown of BlackBerry service. RIM settled the matter for $612.5 million, a significantly larger sum than would have been necessary earlier.

While no major shareholder has spoken publicly about RIM’s management, some dissidents have privately expressed reservations. Big investors seem willing, for now, to see how the new operating system, BlackBerry 10, performs. Two top shareholders, the Bank of Montreal and the Royal Bank of Canada, rely heavily on domestic retail business and would be unlikely to push RIM to seek a foreign buyer — if only for public relations purposes.

In late December, Mr. Balsillie and Mr. Lazaridis made it clear that they intended to remain in control of RIM, even after announcing another delay in the new operating system.

“It is important for you to know that Mike and I, as two of RIM’s largest shareholders, understand investor sentiment, and we are more committed than ever to addressing the issues at hand,” Mr. Balsillie said before announcing that, as a good will gesture, they had cut their salaries to $1 a year.