Republican candidates Mitt Romney and Rick Santorum emerged as the twin frontrunners after the Iowa caucuses on Tuesday, and this is likely to have interesting reverberations for Iran. 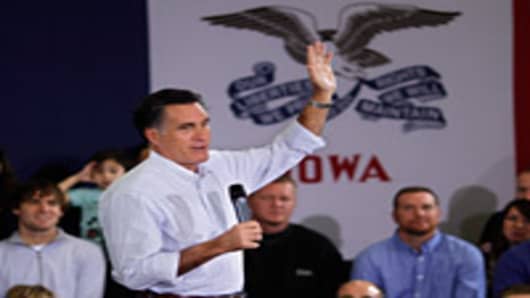 Why Iran? Because both former Gov. Romney and former Sen. Santorum are hard critics of the Obama administration’s handling of the country that Romney sees as America’s largest threat. Both men have said they would bomb Iran if that country persisted in its stated drive to develop nuclear weapons. Both believe that Obama’s efforts to negotiate with Iran sends a signal of weakness. And if one of these men emerges as the Republican candidate to go up against Obama, the Republican party will attempt to play to what it regards as its strength – security and foreign policy – and the rhetoric against Iran is only likely to grow sharper.

Obama’s approach to Iran, of course, is shaped by his campaign promise to abandon the unilateralism of the Bush administration, and to work closely with America’s allies to deal with mutual threats, using methods short of war. While the US took the lead in dealing with supposed threats in Iraq – launching the war promising to go after Saddam Hussein’s alleged “weapons of mass destruction” – Europe has taken the lead in dealing with Iran through “critical dialogue” and reminding Iran of its promises to prevent the spread of nuclear weapons.

Most of the Republican candidates portray this carrot-and-stick approach as weakness, and call for military options.

To be sure, Texas Rep. Ron Paul's strong third place showing in Iowa showed there is some diversity of opinion among GOP voters. The Congressman argues for rolling back US military commitments around the globe and has warned about the costs of starting new conflicts, particularly with Iran. But Paul's views on Iran have prompted strong rebukes from other Republican candidates who hope to also use the issue against Obama.

Romney, who officially won the Iowa caucuses with a mere eight votes (with 30,015 votes against Santorum’s 30,007), has long been critical of Obama’s policy toward Iran, but since launching his presidential campaign, he has become a veritable hawk.

During the Iowa campaign, Romney called Obama's efforts against Iran a failure.

"I want to make sure that the people of this nation understand that he failed us not only here at home, he's failed us in dealing with the greatest threat we face, which comes from Iran.”

During his first run for the presidency, in 2007, Romney managed to make the bombing of Iran sound like a somewhat middle-of-the road option.

“I don’t anticipate that the kind of strategy we would pursue would be a ground-intensive, change-the-regime, change-the-government type of effort. I think it’s more likely that other military actions would be in the nature of blockade or a bombardment or surgical strikes of one kind or another.”

More recently, in debates, he has called on Obama “to impose crippling economic sanctions on the Iranian regime, support the Iranian dissidents, and convey through actions – not just words – that the military option is very real and very credible.”

Santorum, by contrast, has been unequivocal: he would bomb Iran to stop the Islamic Republic’s nuclear weapons program.

In a lengthy interview on Meet the Press over the weekend, Santorum criticized Obama’s attempt at negotiating with the Iranians, and called for increased covert sabotage, bombings, and even arresting foreign scientists traveling to Iran to assist the Iranian nuclear weapons program, and “treating them like Al Qaeda.”

"I would be saying to the Iranians, you either open up those facilities, you begin to dismantle them and, and make them available to inspectors, or we will degrade those facilities through airstrikes and make it very public that we are doing that."

If the intention of all this muscle-flexing was to encourage Iran to step down from its nuclear program, it hasn’t worked. On Jan. 2, Tehran announced that it had produced the nation’s first nuclear fuel rod, a sign that its indigenous nuclear scientists had the technical capabilities to complete all the steps in the entire nuclear fuel cycle. Nuclear fuel rods are composed of pellets of enriched uranium, and are used in nuclear reactors, but some nuclear scientists fret that Iran may be using its peaceful nuclear energy program as a cover for a nuclear weapons program.

Tehran also announced that it had launched a new medium range missile, during a naval drill in the Persian Gulf. Iran says the new missile is designed to evade radar.

And if the US hoped that its close relations with some of Iran's regional neighbors might give it the kind of leverage to encourage better behavior from Iran, that door seems to be closed as well.

Sumit Ganguly, an expert on Indian foreign policy at the University of Indiana at Bloomington, and member of the Council on Foreign Relations, says that India would likely remain neutral rather than succumb to US pressure and oppose Iran's development of nuclear weapons.

"India will still avoid taking sides. The inherent caution that seems to characterise Indian foreign policy is most likely to prevail.

The Indians will try to have it both ways. We will say peaceful resolution of this impending crisis is in the interest of all parties; we enjoin both the United States and Iran to avoid escalation which could contribute to violence. I can virtually write the press communiqué that will emanate from [India's foreign office in] South Block."