GUEST AUTHOR BLOG: Where High Schools Let Us Down by Andrew Hallam, author of "Millionaire Teacher: The Nine Rules of Wealth You Should Have Learned in School." 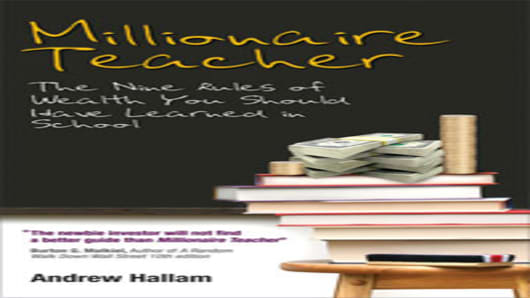 Ever heard of a man focusing so much on a zit at the end of his nose that he ignores a basketball sized testicle?

Most of us unknowingly do something similar with money because our high schools let us down.

Right now, somewhere in the world, a great Science teacher is wracked with guilt about a relatively weak lesson she gave on photosynthesis. In a dark corner of a bedroom, a young math teacher tosses and turns after botching a unit on Pythagoras’ theorem. And there’s an accomplished English teacher, somewhere, brooding over his delivery of....semicolons.

Zits on noses. All of them.

A zit might be a valid concern, but how many teachers or educational curriculum developers are sweating over a lack of financial education? That’s the basketball-sized testicle. And it can destroy lives, wreck marriages, increase daily stress, limit our wealth, and postpone (sometimes indefinitely) a sound retirement.

Our financial destinies are easily controllable if we start with the right lessons. In many cases, we can grow wealthy without requiring a high salary or a gambler’s risk tolerance. We just need to save money, spend responsibly, and invest effectively.

Saving money is actually pretty sexy. It’s a desirable trait, suggesting that you’re in charge of your own destiny, and not a spending junkie craving the next material fix. Those who track their expenditures, as an efficient company does, understand how much money they’re spending on entertainment, rent/mortgage, and life’s essentials. These people are often wealthy or setting wealthy foundations.

Middle class workers can amass more money than the average doctor, lawyer or dentist if they buy what they can afford. Most million dollar homes in America, for example, aren’t owned by millionaires. Instead, they’re owned by high-salaried folk with huge mortgages, little wealth, and envy for the headliners in People magazine.

Most millionaires choose Toyotas over Porches, Timex watches over Rolexes. If you want to be wealthy, it’s better to emulate the spending habits of the rich, and not the borrowed extravagance of the wannabes. Doing so, gives you money to invest in appreciating assets, rather than debt-induced showpieces.

"Middle class workers can amass more money than the average doctor, lawyer or dentist if they buy what they can afford."" -Author, "Millionaire Teacher", Andrew Hallam

Like saving and spending, you can’t beat to the Joneses’ drum if you want to grow wealthy. The average investor employs a financial advisor who usually sells products called actively managed mutual funds.

But countless academic studies suggest that these products are a raw deal—padding the pockets of the “trusted” financial advisor, while costing the average person bucket loads of money over their lifetime.

If we learned this in school, along with a great math lesson, most of us would be far wealthier. Thanks to their “helpful” advisors, too many investors pay hidden fees amounting to 2 percent (or more) each year. How damaging is that 2 percent?

The superfluous 2 percent fee amounts to a difference of $164,350---enough for a decent home in Florida...with a pool. There’s an easy alternative, if we invest with index funds instead.

And it’s a simple lesson worth learning. You can’t be swimming with sharks if you want to be a strong investor.

By learning the rules of wealth you should have learned in school, you’ll be on your way to building a solid financial future, while recognizing that a zit is, well...just a zit.

Andrew Hallam became a millionaire on a school teacher’s salary, while still in his 30s. He wrote "Millionaire Teacher: The Nine Rules of Wealth You Should Have Learned in School" to fill the gaps of financial literacy, which are often ignored in schools. Read more at andrewhallam.com.