Call to the Floor: TransCanada CEO

The proposed Keystone XL Pipeline to channel crude oil from Canada to the Gulf of Mexico would create jobs and ease energy prices for the United States, TransCanada CEO Russ Girling said Thursday on “Fast Money.”

Girling said the $7 billion project would create an estimated 20,000 U.S. jobs from construction and manufacturing, a figure he defended as estimates from an independent study. 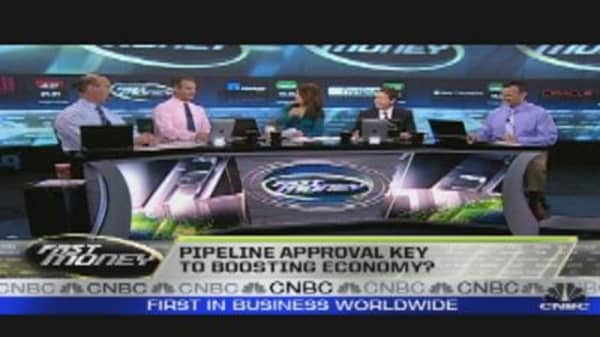 Asked for an estimate on the pipeline’s effect on energy prices, Girling deferred from naming a specific dollar figure.

“Obviously, if we can introduce new supply, all things being equal, you would expect that would have a downward impact on prices, and that’s good news for consumers,” he said.

The Keystone XL Pipeline is awaiting approval from the Obama administration. Support for the project has come from the energy industry and labor unions, while environmental groups have raised health concerns.

“This pipeline has been under the most rigorous review,” Girling said, adding that safety precautions have been met over and above what was required. “It’s going to be the safest pipeline that’s ever been built in the United States.”

If the pipeline does not get built, Girling said the company would look at alternatives to bring the crude oil to Canada’s west coast, bound for Asian markets.

TransCanada stock prices have been pushed to the $42 level on fears that the pipeline would be rejected, sending investors toward companies such as Enbridge and Enterprise Products.

But that could turn around with pipeline approval.

“TRP could be an incredible opportunity to own, obviously, if this gets done,” he said.

For Rich Ilcziszyn
No disclosures

For Russ Girling
No disclosures

For Mike Ryan
No disclosures