Thailand’s economy has the potential to grow at 7 percent in 2012, the country’s Deputy Prime Minister and Finance Minister, Kittirat Na-Ranong, told CNBC Friday. He added that the billions being spent this year on post-flood reconstruction projects would help boost the economy. 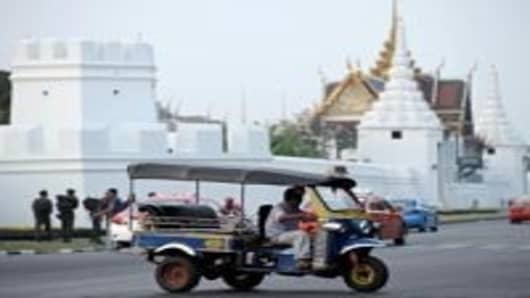 Nicolas Asfouri|AFP|Getty Images
An auto rickshaw or tuk tuk drives along a street in Bangkok on January 13, 2009. The tuk-tuk, so-called because of the noise it makes when it starts, has been adopted as a Thai symbol, it actually originates in Japan. The motorized version reached Thailand in 1959, and after a few technical and aesthetic modifications, it became the colourful, open-air vehicle seen careering across Thailand today.

“The government has set a target for GDP growth to be in the range of 4.5 to 5.5 percent. I believe Thai economy has the potential to enjoy as high as 7 percent real GDP growth (in 2012),” Ranong said.

Thailand’s economy likely grew just 1.5 percent in 2011, due to the massive disruption caused by the floods that began in late July, according to Ranong.

In order to achieve growth around 7 percent, he says post-flood reconstruction efforts, policy rebalancing and redistribution of wealth will play a pivotal role.

In December, the Thai government approved a 350 billion baht ($11 billion) budget for water management and other infrastructure development, targeted at eliminating the future risk of flooding and to boost investor confidence.

“Huge investment will be thrown into those infrastructure projects, so (let us) talk about the potential of the economy this year,” Ranong said.

He hopes the economy will also get a boost from further monetary easing when the Bank of Thailand meets next week, adding that the central bank's rate cuts so far have been too "conservative.”

To Go Ahead With Minimum Wage Hike

Prime Minister Yingluck Shinawatra’s plan to increase minimum wages was on track, says Ranong, and will take place along with a cut in corporate income tax rates, to help companies cope with rising costs.

However, he did not specify when the new minimum wage scale would come into effect. The revised wage scale was to have been implemented in January, but according to the Labor Ministry it will now be effective April 1. 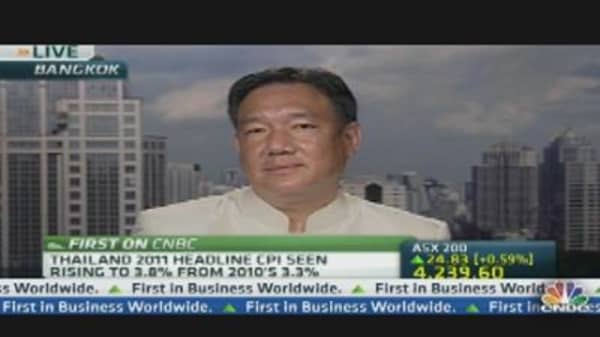 “It’s time for us to readjust ourselves from an export-led growth economy to more dependence on domestic consumption,” Ranong said.

“If you look at those millions of people who are earning too little in the system, it won’t only be an economic problem, it can become a social problem,” he added.

Labor organizations in Thailand have been lobbying for a daily minimum wage of 300 baht, up from the current average of 160 baht.