With the stock down dramatically a day after the search giant had its first earnings miss in six years, Moran lowered his price target on the stock to $625 from $700; two weeks ago he downgraded the stock to “hold” from “buy.” 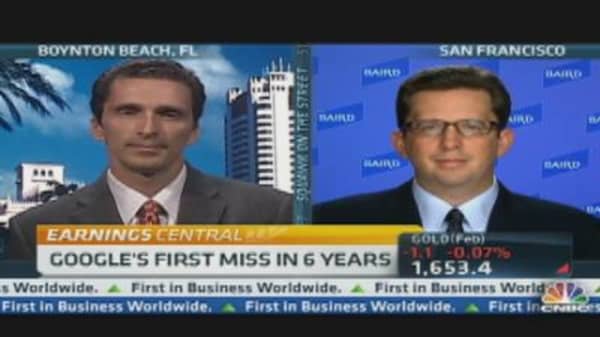 Weakness in Europe and in the online advertising market, two reasons for the earnings miss, "will likely persist for the next two quarters, and that is contributing to decelerating growth for Google as a whole," Moran said. The momentum "is now gone."

He's particularly concerned about the 8 percent decline in "cost per click" searches. While revenue was up 25 percent, "that's down from 28 percent in the second and third quarters last year," Moran said. "Clearly things have slowed."

Colin Sebastian, senior research analyst at Robert W. Baird, said revenue included some hefty one-time charges, while earnings reflected the impact of currency and spending weakness in Europe. He has a “buy” rating on the stock and a $750 price target.

"It is shortsighted to focus on cost per clicks," Sebastian said, and more important to focus on revenue. "If you peel back the onion a bit here, obviously there was tougher [comparison] year over year. The core business continues to grow very nicely" while the company made other milestones in display and mobile advertising, he said. 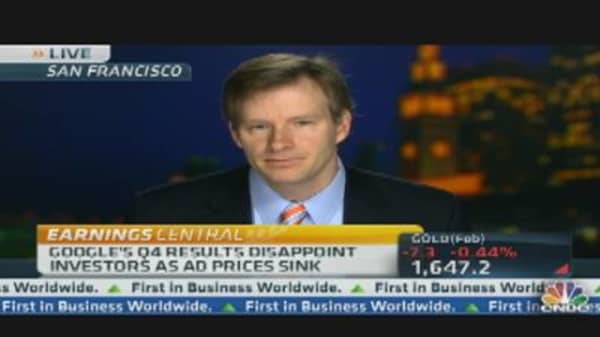 Benchmark Co.'s Moran disagreed. "The revenue number clearly wasn't good," he said. "Look at the stock. That reflects what the Street really thought of the revenue number."

Mark Mahaney, Internet analyst at Citigroup Investment Research and Analyst, seemed to fall in the middle. In a separate CNBC interview, he said the decline in cost per clicks came as more people do their searches on their smartphones, rather than on their computers. Computer searches earn Google more ad money.

Also, if you adjusted for certain factors, such as foreign exchange, "the revenue was in line, but the model was not adjusted correctly" by analysts, including himself. To Mahaney, that was Google being Google because the company "has always been a black box" in terms of the disclosure it gives analysts.