Economy Could Steer Stocks with Europe, Fed in Rearview Mirror

The Fed gets top billing in the week ahead, but barring any surprises, the steady wave of corporate earnings reports and important economic data could be the real driver for stocks. 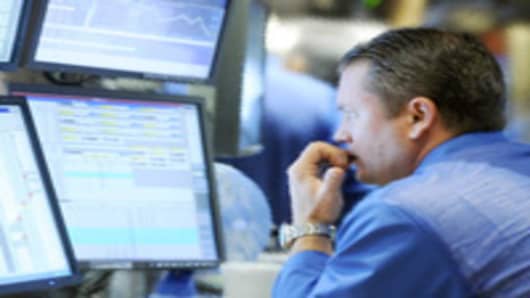 There are a dozen Dow 30 companies and about a quarter of the S&P 500 companies reporting in the week ahead, in industries ranging from pharmaceuticals to airlines to energy. Apple , Boeing , McDonald’s and Procter & Gamble are among the more significant of those reporting.

Fourth-quarter GDP is reported Friday and is expected to come in around 3 percent, which would be the fastest pace since the second quarter of 2010.

“With each passing day, it feels as if Europe continues to slip into the background as a driver of markets,” said Nomura Americas Treasury strategist George Goncalves. “Maybe that’s a naïve and short-sighted view market participants are having.”

Goncalves said the move in 10-year yield above 2 percent, off its 2012 low of 1.83 percent earlier in the week, reflects the easing of fears about Europe, as Greece moved Friday toward a deal on debt restructuring with its private creditors.

“Europe’s still important to look at and follow,” he said, adding it may become an issue for markets again in March as European Union leaders adopt expected changes in their treaty to reflect greater fiscal integration and oversight.

This week’s two-day Fedmeeting ends Wednesday with a statement, a new forecast and a press briefing by Fed Chairman Ben Bernanke.

While market participants are somewhat unclear about the new routine, they mostly do not expect the Fed to announce a new easing program. The Fed altered its communications policy and will begin providing a forecast of the key Fed funds rate by its members.

“I don’t think the Fed is going to come out sounding hawkish. That said, the bond market is thinking the Fed is on hold for four years,” he said. “The bond market thinks they’re on hold until 2015, 2016. That’s the years they’re pricing in right now.”

The market will continue to debate whether the Fed is going to do a third round of quantitative easing through further asset purchases, but most Fed watchers do not expect it to be announced at this meeting. Many believe the Fed will hold the door open for more easing, but not commit to it until at least the second quarter, if it does take that step.

“I don’t think the markets expect anything with respect to “QE3” or anything like that, but certainty we’ll get a sense from the Fed as to whether they’re leaning in that direction, and if they are leaning in that direction, it could begin to weigh a little bit on the dollar and probably be good for risk appetite,” said Robert Sinche, head of global foreign exchange strategy at RBS.

“Next week’s meetings (Fed and EU finance ministers) are important because while the liquidity impulse has been a bit more positive for Europe, the question is can they follow up with agreements on private sector involvement in Greece and can they follow through with fiscal commitments,” he said. The European Union is working toward finalizing its fiscal integration pact Jan. 30, and it would be signed in March.

“For me, it’s corporate earnings that are the most relevant for the market. So far, it’s been a very much mixed bag. I’d say it’s mediocre. Compared to relative expectations, it’s been the weakest earning season we’ve seen in years,” said Peter Boockvar, strategist with Miller Tabak.

As of Friday morning, 14 percent of the S&P 500 had reported earnings and about 60 percent have reported earnings per share above expectations, according to Thomson Reuters I/B/E/S. That is below the 70 percent plus rate of other quarters during the recovery, but it is still early in the earnings season.

Analysts had expected a growth rate for S&P earnings of about 8 percent at the start of the year. But so far, the actual earnings reports, combined with newly lowered expectations for companies yet to report, are running at about a 5.8 percent growth rate.

Paulsen said in addition to earnings, he’s watching the weekly jobless claims number, which surprised with a large decline to 352,000 this past week. If there is another good number, he would look to economists to raise their employment forecasts for January.

He does not expect the Fed to be the big story for stocks. “I don’t think it’s going to have a lot of impact. As long as the economy is doing okay, and Europe is calming down, the Fed is being removed from the spotlight,” he said.