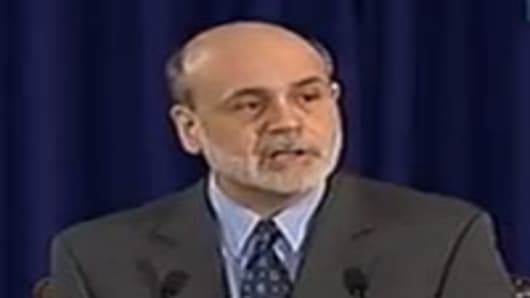 For one time in a row Fed head Ben Bernanke got the story right. No, it wasn’t King Dollar. It was taxes.

Testifying before members of the Senate Budget Committee today, Bernanke referred to the scheduled repeal of the Bush tax cuts. He said, “If no action is taken by January 2013, there will be a very sharp change in the fiscal stance of the United States government.”

Now, lest we give him too much credit, Bernanke was kind of making a Keynesian point. Why? Because he said in his “fiscal stance” argument that sharp spending cuts would also damage recovery. But at least he made his tax-hike opposition clear. And at least he opposes higher tax rates, which would in fact damage the economy.

He could have gone further. The Wall Street Journal is reporting that President Obama’s budget for 2013 will propose higher tax rates on the rich. Additionally, Obamacare in 2013 will raise the payroll tax 3.9 percent, and apply that to investment taxes such as capital gains and dividends.

Bernanke didn’t comment either on Obama’s millionaire-tax proposal or the Obamacare tax hike. But you can be sure investors and entrepreneurs are well aware of it.