European stocks rose, breaking a two-day losing streak, helped by a handful of upbeat corporate outlooks and as investors bet that Greece will finally secure the bailout it needs to avoid a chaotic default.

Greek parties will try yet again to strike a reform dealin return for a new international rescue package to avoid a chaotic default, after a string of delays which have prompted some EU leaders to warn that the euro zone can live without Athens.

McDonald's edged higher after the fast-food giant posted January sales that beat expectationsat established restaurants across the globe, with robust U.S. performance helping to offset the impact of weakness in Europe.

Among earnings, Sprint Nextel posted a wider lossas costs from the Apple iPhone weighed down the No. 3 U.S. mobile operator. Still, shares of the wireless service provider still traded higher. 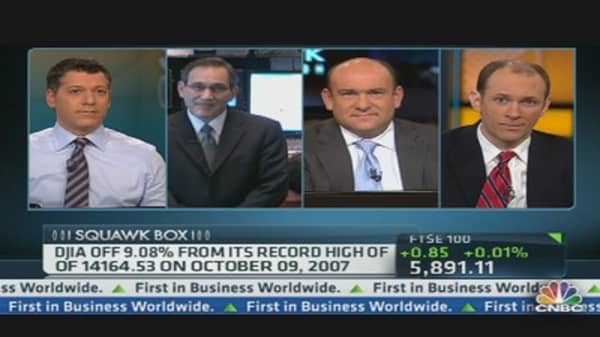 Time Warner reported better-than-expected profit, thanks to its cable networks and the latest Harry Potter movie.

Buffalo Wild Wings suged after the bar and grill chain posted results that topped expectations as more consumers ate at both its new and existing restaurants.

YahooChairman Roy Bostock and three other directors will step down as the struggling company ploughs ahead with an internal overhaul, including discussions on dealing with its stakes in China's Alibaba Group and Yahoo Japan.

On the economic front, weekly mortgage applications surged last week, buoyed by increased demand for refinancing as interest rates declined, according to the Mortgage Bankers Association.

The government is scheduled to auction $24 billion in 10-year notes at 1pm ET.