The euro rose to hit a two-month highagainst the dollar and European stocks climbedfollowing reports that Greece had agreed on a bailout deal. A statement on the deal is expected shortly.

"A few minutes ago I got a call from the Prime Minister of Greece saying that an agreement has been reached and has been endorsed by the major parties," said ECB President Mario Draghi in a news conference. "This afternoon we will be having a euro group meeting with the ministers, and we will be having a full report of this, the agreement, and also a discussion of the further steps."

Meanwhile, the ECB kept interest rates on hold at 1 percent, as expected. However, Draghi hinted at relaxed rules for banks taking part in a long-term refinancing operation at the end of the month, boosting hopes that additional liquidity will be injected in the system.

"It is essential for monetary policy to maintain price stability for the euro area as a whole," commented Draghi. "This ensures a firm anchoring on inflation expectations in line with our aim of maintaining inflation rates below but close to 2 percent over the medium term. Such anchoring is a prerequisite for monetary policy to make its contribution to supporting economic growth and job creation in the euro area."

On the economic front, weekly jobless claims declined 15,000 to a seasonally-adjusted 358,000, according to the Labor Department, hitting the second-lowest level in almost four years. Economists had expected claims to gain 3,000. 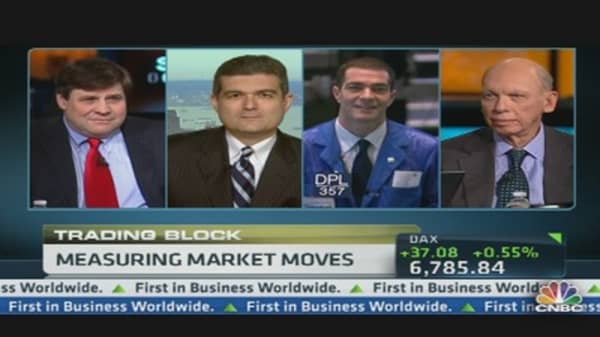 Among earnings, Pepsico fell after the beverage giant reported better-than-expected profit, but forecast a 5 percent decline in 2012 earningsas it increases advertising and marketing costs. In addition, the firm said it plans to cut 8,700 jobs in a restructuring.

Cisco slipped even after Dow component posted better-than-expected results and announced plans to raise its dividend. Meanwhile, at least five brokerages raised their price targets on the firm.

Groupon plunged sharply a day after the online deal company posted an unexpected loss in its first quarterly results since going public.

Diamond Foods plunged following news of an internal investigation that found the company had improperly accounted for paymentsto walnut growers. The company’s CEO and CFO have been placed on leave and the news puts the company’s potential purchase of the Pringles brand from Procter & Gamble in doubt.