President Barack Obama called the $26 billion settlement between government authorities and five of the nation’s biggest banks a "landmark event" in a press conference on Thursday. 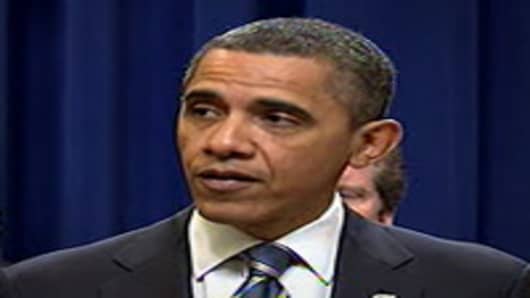 Indeed it is the largest federal and state settlement in U.S. history.

The President expressed lofty goals for the settlement's impact, meant to hold banks accused of reckless foreclosure practices accountable to the more than 4 million Americans affected.

The banks involved in the deal are Bank of America , Wells Fargo, JPMorgan Chase , Citigroup and Ally Financial .

"It will beging to turn the page on an era of recklessness that left so much damage in its wake," he told the roomful of reporters.

The President concluded by pressing Congress to take the final step and send the bill to him for signing.

"There is no excuse for inaction. The bipartisan nature of this settlement is a testament to what happens when eveybody's pulling in the same direction," he concluded.