Underwater pumping operations began Sunday to remove some of the 500,000 gallons of fuel aboard the Costa Concordia, officials said, nearly a month after the cruise ship ran aground off Tuscany. 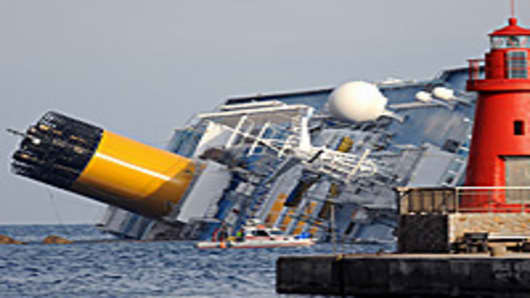 After nearly two weeks of delays because of rough seas and bad weather, the pumping got under way on the first of 15 tanks that are believed to hold around 84 percent of the fuel on board, Italy's civil protection department said.

Officials say it will take 28 consecutive days of pumping to empty the tanks.

Dutch shipwreck salvage firm Smit is overseeing the operation, along with an Italian partner. The fuel extraction process involves fixing valves on the underwater fuel tanks, one on top, one on bottom. Hoses are attached to the valves and as the oil -- which must be warmed to make it less gooey -- is sucked out of the upper hose, sea water is pumped in to fill the vacuum via the lower hose.

"We expect the next five days to be good weather, and we will work 24 hours a day to pump out the fuel," said Bart Huizing, Smit's salvage master. He said operations would initially focus on the six tanks in the front part of the ship where about 62-65 percent of the fuel is located.

"Hopefully by the end of the week we will have the majority out," he told The Associated Press in Giglio.

Ever since the Concordia ran aground Jan. 13, fears have swirled about fuel leaks and resulting contamination of the pristine waters off the tiny island of Giglio, which form part of a protected sanctuary for dolphins, whales and porpoises. There have been no reports of any serious leaks.

The Concordia slammed into a reef off Giglio after the captain deviated from the ship's planned course in an apparent stunt. Passengers have said the captain then delayed sounding the evacuation alarm until the ship had capsized so much that lifeboats on one side couldn't be lowered.

About 4,200 passengers and crew escaped, but 17 bodies have been found and another 15 people remain missing and presumed dead.

The captain, Francesco Schettino, is under house arrest, accused of manslaughter, causing a shipwreck and abandoning the ship before all the passengers had been evacuated. He has said the reef wasn't marked on his nautical charts.

Earlier Sunday during a memorial service for victims, Italy's president and the country's top bishop demanded justice and called for the truth of what transpired that night to come to light.

"Let the light of the Lord help bring about truth and justice, let wounds be healed and let trust and courage for the future be reinforced," Cardinal Angelo Bagnasco said in his homily.

President Giorgio Napolitano, who attended the service at Rome's St. Mary of the Angels basilica, said he was sorry that what transpired "was the responsibility of Italy and Italians."

"We must continue to investigate," he told reporters outside the basilica. "Prosecutors deserve respect for the job they're doing."

Another memorial service, falling on the one-month commemoration of the grounding, was planned for Monday in Giglio itself.

Costa is a unit of the world's largest cruise operator Carnival .