Happy Valentine's Day: Do You Need An Office Love Contract? 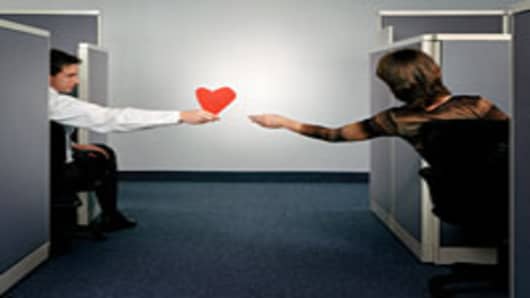 Just before Valentine's Day this year, a new book came out about President John F. Kennedy's 18 month long affair with a college intern. If you're Commander in Chief, you can probably call the shots on how to engage in a workplace romance. For the rest of us, the rules are a bit more vague.

Valentine’s Day is historically the busiest day of the year for marital law firms. The days leading up to Valentine’s Day are often chosen to confront an adulterous partner. In the workplace, Valentine's Day can be fraught with conflict, as many employers discourage workplace romances, hoping to avoid sexual harassment claims.

David Mejias is founder of the marital law firm Mejias, Milgrim & Alvarado, P.C. He has a B.S. from the University at Albany School of Business and a J.D. from Fordham University School of Law. Mejias also served 3 terms as a Nassau County legislator.

LRS: As an executive or manager, what are some things to consider before getting involved with someone at the office ?

LRS: Is it better for a company to ban dating, or better not to ban ?

As an employer you want to make sure there's no inference of a quid pro quo. You want to discourage anything that looks like a manager is pushing a relationship in exchange for promises of a promotion. That's illegal and there's a cause of action for that.

But having a ban doesn't necessarily protect the company. If the company knew about the relationship and didn't do anything, the ban wouldn't help them.

Keep in mind too that in an "at will" employment state, like NY, an employer can fire someone for having a relationship, regardless of whether there's a policy or not, unless there's an employment contract, or the person belongs to a union.

LRS: Does a "love contract", in which the parties state in writing that their relationship is consensual, protect the company or the manager ?

A love contract is intended to limit the liability of a company should a relationship go bad. But an employee can say they were pressured into signing a love contract.

If a manager oversees an employee he's involved with, there could be an inference that the manager is misusing his position. The employee really shouldn't remain under that manager's supervision.

We've had divorce cases where one party was having an affair at work with an employee that later led to a sexual harassment claim. A love contract doesn't prevent that.

LRS: So what can companies or managers do ?

A lot of companies require managers to self report relationships with support staff. As a manager you should absolutely take steps to remove yourself from supervising someone you have a romantic relationship with.

The best for all involved is to make sure there are no relationships between managers and employees.

LRS: Valentine's Day is your busiest time of the year ?

People have an idealistic view of love. Sometimes they realize on Valentine's Day that they don't have that. They're not living a Hallmark commercial, and they want to make a change.

We had one situation in which a client had her husband served on Valentine's Day when he was out to dinner with his girlfriend, who learned at that time that he was married.

We try to free up the few days before Valentine's Day because we get so many inquiries from new clients. Plus Valentine's Day is a busy day in court because people get their cases adjourned to that day. There are even judges who purposely schedule court dates on Valentine's Day, to remind people that they were once in love and that they should try to work things out.

LRS: What advice do you have for high net worth executives who come to that realization?

Don't be impulsive. Consult an attorney. Some things to consider are of course child support, visitation, and so on. But you must also consider the timing with regard to job matters like bonuses and stock options. These could be marital property. People file for divorce on Valentine's Day and don't realize that the bonus they get in February or March could still be marital property.

LRS: Any Dos and Don'ts for Valentine's Day gift giving at the office?

You want to be careful not to have your actions misinterpreted as a romantic overture. That could lead to a harassment claim down the road. I would suggest not singling anyone out. If you want to acknowledge the day, treat everybody the same. And you may want to forego anything.