Europe Crisis Will Take Years to Sort Out: Paulson

Although there are similarities with what the United States went through at the onset of the financial crisis, the issues in Europe are more complex and will take years to resolve, Henry Paulson, former Treasury Secretary and founder of the Paulson Institute told CNBC on Wednesday. 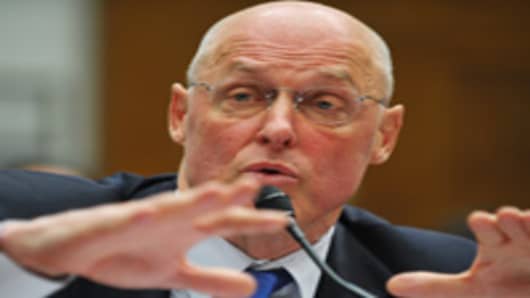 "There is similarity [with the financial crisis in the U.S.] in certain regards. This has been going on for a long time and I think it will take years to play out," Paulson told CNBC.

Paulson, who served as Treasury Secretary when the subprime mortgages credit crunch erupted, sparking the world's worst economic crisis since the Great Depression, said that at the time the U.S. was faced with a "collision of political forces and market forces".

"That's really what you're seeing in Europe," Paulson said. "The structural issues around the EU are very difficult issues."

The most important thing is protecting the banks from a big failure that could drag down the whole banking system, he said.

"When you look at Lehman Brothers – I believe Lehman Brothers was a symptom as much as anything – I don't think that is the right analogy. The one thing you should take away from Lehman Brothers is you don't want a big, systemic institution to fail and you certainly don't want that with a member state [in Europe]," Paulson said.

In his opinion European Central Bank President Mario Draghi has taken "a big step" to stabilize the banks with the "massive" liquidity injection. 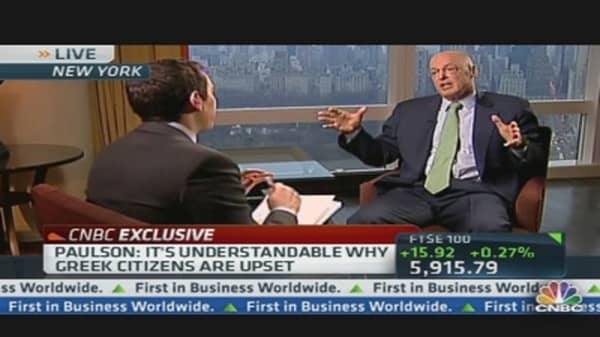 The ECB launched a long-term refinancing operation (LTRO) in December, offering banks three-year loans at its record low 1 percent interest rate and another LTRO is scheduled for Feb. 29.

The important thing is that a Greek default doesn't happen in a "messy" way said Paulson, who added: "The American people don't like bailouts, no one likes bailouts but they're certainly better than the alternative, which would be a catastrophe."

American banks are much better capitalized than a few years ago and better regulated and their exposure to sovereign debt in the European Union is manageable, but still "I wouldn't want to test this firewall if … you had catastrophe there. And I'm not expecting that," Paulson said.

The financial crisis stemmed from wrong government policies and is not the fault of banks exclusively, despite the fact that they made a lot of mistakes, according to Paulson.

"Wall Street will get through this, Wall Street made a lot of mistakes… financial crises stem from flawed government policies. Always."

"This was a huge credit crisis. Why did Americans borrow too much and save too little? There are flawed government policies, "he said.

But while banks worked to correct their mistakes and a lot was done to strengthen the banking system, the government policies that brought on the credit crunch still need to be changed, Paulson said.

"I think it's going to be years before we get our unemployment down to an acceptable rate. It's going to take a higher growth rate than we had to create a higher jobs number," said Paulson. 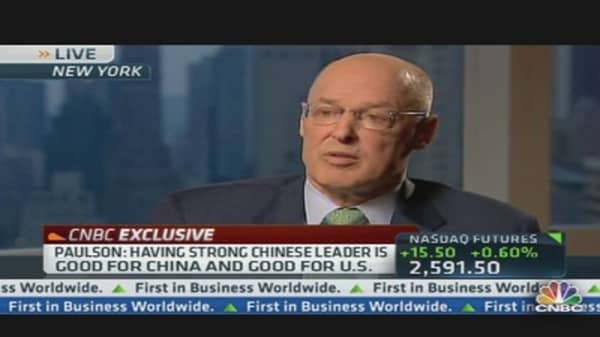 "I'm not being an alarmist, I just think that until we deal with the huge structural issues that we have… we're not going to get the kind of growth that we need."

Tax issues have come into the limelight recently as a tentative deal was reached to preserve a cut in the payroll tax and provide more unemployment benefits.

Paulson said there was no doubt the economy needed more tax revenues but that the whole tax system should be revamped.

"The issue shouldn't be what do we do with this rate or that rate, it should be what form of taxes… will give us economic growth? We need a new system and I've been for a system where we'd eliminate the deductions… and lower the rates and have something that will make us competitive," he explained.

Chinese central bank governor Zhou Xiaochuan said on Wednesday China will continue to invest in euro zone government debt and will play a bigger role in solving the area's problems via the International Monetary Fund and the EFSF rescue fund, boosting hopes for a solution.

But at the same time Chinese companies, as well as government officials, are worried about Europe, he added.

"Their job isn't becoming any easier to continue to grow and meet the needs of the Chinese people."

Living conditions have improved dramatically over the past 10-20 years but China, with its $6 trillion gross domestic product still dwarfed by the U.S.'s $14 trillion and Europe's $16 trillion, has many reforms to carry out.

"I believe that you're going to see ultimately more political freedom, more personal freedoms, because they will inevitably follow the economic freedom," he added.