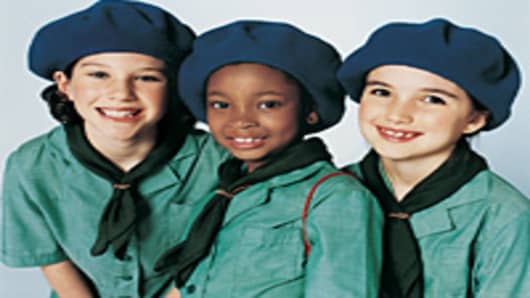 For the past 35 years, Little Brownie Bakers has been making Girl Scout Cookies. But there’s a story behind this story.

Little Brownie Bakers is a division of Keebler, which is owned by Kellogg . And over the last couple years, supermarket versions of the Girl Scout Cookies have hit stores, selling on a year-round basis.

One might think that Kellogg is cannibalizing sales of Girl Scout Cookies by producing look- and “tastealikes” year round, but Amanda Hamaker, manager of product sales for the Girl Scouts says that’s not the case.

“We’ve had the conversation about the cookies being made in the same factory,” Hamaker said. “But we haven’t seen a decline in Girl Scout Cookies because of what they’re doing.”

Hamaker said Girl Scout Cookies grossed $760 million last year, or 207 million packages of cookies, which was a four percent increase from the year before. The Girl Scouts receive as much as 20 percent of that money.

“Girl Scout consumers love our cookies, but they purchase them because there are supporting girls,” Hamaker said. “That’s not happening at the supermarket.”

A message left for a spokesman at Little Brownie was not returned.

Little Brownie is one of two bakers of Girl Scout Cookies. The other is ABC, which is owned by Interbake Foods. Interbake does not produce similar cookies at retail.

While the brands hitting traditional retail hasn’t changed how the Girl Scouts sell their cookies, the future might.

Girl Scouts have been barred from selling their cookies online because the Girl Scouts organization doesn’t believe the girls are genuinely at the front of those sales.

“We’re reviewing things,” Hamaker said. “We absolutely believe the girls can have a more robust experience if they sell online. We’re just trying to figure out the safest way of doing this.”