A federal jury in Houston has convicted financier Allen Stanford in one of the largest financial frauds in U.S. history. 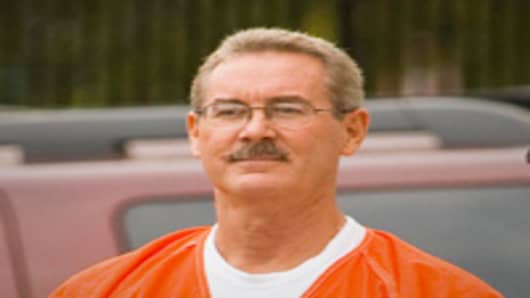 After a five week trial and nearly four days of deliberations, the jury found Stanford guilty on thirteen counts, including conspiracy, mail and wire fraud, and obstructing the Securities and Exchange Commission investigation of his global financial empire.

Stanford was acquitted on one count of wire fraud, involving a gift of Super Bowl tickets in 2006 to the top banking regulator in Antigua, where the fraud was based.

Stanford sat stoically as the verdict was read. Members of his family, including his 82-year-old mother, wept openly.

He faces up to 20 years in prison for the most serious charges but could be imprisoned for much longer if a judge orders his sentences be served consecutively.

Stanford, who will turn 62 later this month, was accused of running a 20-year scheme, "soliciting funds under false pretenses, failing to invest those funds as promised, (and) misappropriating funds for personal use," according to the grand jury indictment.

Authorities alleged the Ponzi scheme revolved around certificates of deposit issued by a Stanford-owned bank in the Caribbean island nation of Antigua and Barbuda, and marketed around the world as "safe, secure" investments. In fact, prosecutors said, Stanford used Stanford International Bank as "his personal ATM," skimming as much as $2 billion in customer funds for his own use.

Court-appointed defense attorney Robert Scardino said he was "disappointed" by the verdict, and that his client was as well. He would not speculate on an appeal, saying the defense has 14 days to file a motion. It will be up to the judge to decide if Scardino and co-counsel Ali Fazel would handle any appeal. Stanford's defense is being paid for by the taxpayers because all his funds are frozen.

Scardino had told jurors at the start of the trial to anticipate hearing from Stanford himself, but ultimately Stanford did not take the witness stand. Scardino would not look back on the decision.

Speaking to reporters outside the courthouse, investor Cassie Wilkinson, 62, said the verdict "restores her faith" in the system.

"It makes me think that maybe we're not completely forgotten," said Wilkinson, a former owner of an office furniture dealership who lost around $500,000 invested in Stanford's certificates of deposit.

Angela Shaw, the director and founder of Stanford Victims Coalition, said the verdict was bittersweet.

"I hope today is a turning point in seeing our real justice," Shaw said. "I also hope the Department of Justice looks further at the pervasiveness of the criminal activity that allowed the Stanford Ponzi scheme to reach 21,000 victims in 65 countries. It took a lot more than a handful of criminals to steal $7 billion from victims around the world, and I hope Justice isn't satisfied with catching just the big fish and letting the others swim away. Today was a good start — a slow one, but still a good one."

Once listed by Forbes as the 205th richest American, Stanford was said to be worth more than $2 billion before the authorities moved in. He was a major contributor to both Republican and Democratic politicians.

His holdings included a fleet of private jets and yachts, and several homes. Stanford raised eyebrows around the world with attempts to popularize the game of cricket, including sponsorship of a $20 million cricket tournament that was funded with investor money.

The defense claimed Stanford's companies were solvent and the bank was able to meet its obligations to depositors. In his only in-depth television interview after the scandal broke, Stanford told CNBC in 2009 that the SEC was to blame for the investor losses, having sued the companies, forcing them into receivership in February of that year.

"They took a ... global group of great companies with the best people in the world — who I love dearly, and it's broken my heart to see what's happened to them — and they decimated this thing, they decimated it," Stanford said.

After establishing Stanford International Bank in 1990, Stanford created a task force to re-shape Antigua's banking regulations. Stanford was accused of paying hundreds of thousands of dollars in bribes to Antiguan regulators to throw off U.S. authorities. One of those regulators, former Financial Services Regulatory Commission chief Leroy King, was indicted along with Stanford in 2009. He is fighting extradition to the U.S.

The trial has been closely watched by Stanford's 28,000 investors, since it represents their best chance of recovering any substantial portion of their losses. Federal prosecutors sought to seize some $7 billion in assets, as well as the contents of 35 mostly offshore accounts. Since a federal judge placed Stanford's companies in receivership in 2009, investors have recovered just pennies on the dollar.

The case, which came just months after the Bernard Madoff scandal broke, was yet another black eye for the SEC. A 2010 report by the agency's Inspector General found that officials in the SEC's Fort Worth regional office had been aware of potential problems with Stanford's CD's as far back as 1997, but repeatedly declined to take action because "novel or complex cases were disfavored" at the agency.

The report found the SEC ramped up its investigation after the Madoff scandal broke in late-2008. By the time the agency sued Stanford and his companies in February 2009, alleging a "massive Ponzi scheme," the fraud had grown from $250 million into the billions, the report said.

More troubling, the report found, the SEC's regional head of enforcement, Spencer Barasch, repeatedly quashed investigations of Stanford, then later sought to represent the company when he went into private practice at Andrews & Kurth.

"Every lawyer in Texas and beyond is going to get rich over this case. Okay? And I hated being on the sidelines," Barasch reportedly told investigators.

In January, Barasch agreed to pay a $50,000 fine to settle civil conflict of interest charges by the Justice Department, though he denied wrongdoing. A SEC investigation is ongoing.

The years of inaction by the SEC, coupled with Stanford's political connections in the U.S. and the Caribbean, fueled rampant theories of a conspiracy. There were rumors — never proven — that Stanford had been a government informant and was protected as a result. Stanford himself did little to tamp down the speculation.

"Are you talking about the CIA?" Stanford replied when asked by CNBC in 2009 if he was an informant. "I'm just not going to talk about that."

The judge in the criminal case, U.S. District Judge David Hittner, cited Stanford's international connections in holding him without bail as a flight risk following the 2009 indictment. But Stanford's imprisonment led to one of the most bizarre twists in the case — and further delays for investors.

In the fall of 2009, Stanford was badly beaten by a fellow inmate at a privately-run federal detention center in Conroe, Texas. After surgery and while still in federal custody, Stanford became addicted to prescription drugs.

In January, 2011, Hittner ruled Stanford was incompetent to stand trial, and ordered him to undergo drug treatment at the federal prison medical center in Butner, North Carolina — part of the same complex where Madoff is serving a 150-year sentence.

Doctors at the prison gave Stanford a clean bill of health in October, but his attorneys claimed he was suffering amnesia and could remember nothing that occurred before the 2009 assault. Prosecutors, and the prison doctor in charge of his treatment, argued Stanford was faking.

In December, over the defense's objections, Hittner ruled Stanford was competent again, and the trial began on January 23.