With advertisers on the run, should satellite radio step in and grab Rush Limbaugh? 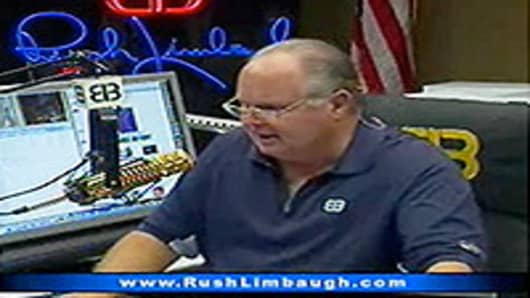 The latest wrinkle in the ongoing controversy is the cancellation of all national commercials during “The Rush Limbaugh Show” by its syndicator, Premiere Networks.

This comes after nearly a hundred national advertisers and dozens more have dropped Limbaugh and other conservative commentators like a political hot potato.

The idea that the recent controversy could actually become “the end of talk radio” is a comment from Rush Limbaugh himself.

Over the past few weeks, Rush Limbaugh has been under fire for controversial remarks regarding a young law student and her support that her medical insurance should cover her birth control.

Since calling her a “slut” among other things, he has apologized for his comments yet at least one poll shows few people believe him and advertisers are still heading for the door.

A new campaign — with the Twitter hash tag #BulliedbyRush — spearheaded by Jane Fonda, Robin Morgan and Gloria Steinem, founders of the “Women’s Media Center” wants him off the air entirely.

In an op-ed the three women call on the FCC to take action saying that it’s time to “take back our broadcast resources” and get what they call “toxic, hate inciting speech” off the public airwaves.

With both sides of the aisle gearing up for battle, it’s possible that we won’t be going back to business as usual for political pundits.

Could this be an opportunity for SiriusXM Satellite Radio, Pandora or even other upstarts like Stitch?

It wouldn’t be the first time that a high-profile, controversial name moved from terrestrial radio to satellite radio — Howard Stern forged that trail. Or that the question about the possibility of Limbaugh moving to satellite has been asked. But, it is a new moment in time and Sirius XM is sitting on a river of cash.

In a recent interview on CNBC’s “Mad Money” Sirius XM CEO Mel Karmazin did not comment on Limbaugh but did say that the company was generating free cash flow in the hundreds of millions and would have “between a $1.2 billion and a $1.5 billion of cash on our balance sheet” at the end of this year.

“The competition we are facing today, terrestrial radio, is not investing in new content. They're not going to get bigger. On the I.P. side of the house, don't know who is going to win. I think that you know, today we are the number one radio revenue company,” Karmazin said.

Whether you love him or hate him, there is little disagreement that Rush is a major franchise that would take major bucks to secure.

Ignoring current contracts and other minor issues, here is what a few of the analysts are saying:

“Would be fantastic for Sirius if they could get Rush. They have plenty of capacity to add content to their offerings”.

“When you get people to pay, you have to have people passionate about the program.” And in this case, “even if it’s a small percentage of the population, the economics might work. I’m not saying they would do it, but they would have to take a cursory look at it”

“It’s early in their [Pandora’s] business model and they are inherently about music customization.” And while the company has “6-percent of the overall radio market ... they’re focused on monetizing that explosive growth in hours through advertising.”

Martin Pyykkonen, Wedge Partners agrees that Pandora isn’t a serious option, though he does think Sirius XM could be:

“SIRI might consider a Rush Limbaugh program — they haven’t shied away from controversy as seen with Howard Stern, although Limbaugh represents a higher level of controversy. SIRI’s business model and outlook, however, includes programming costs coming down or at least staying flat as a percentage of revenue — adding Limbaugh could drive programming costs up quite a lot...”.

Sirius XM and Premier Radio, the syndication arm of privately held Clear Channel have not yet responded to requests for comment.