Chinese banks have been reporting record profits for 2011, accompanied by rising non-performing loans (NPLs). Analysts tell CNBC, while loan losses are set to rise further, they are unlikely to reach threatening levels. 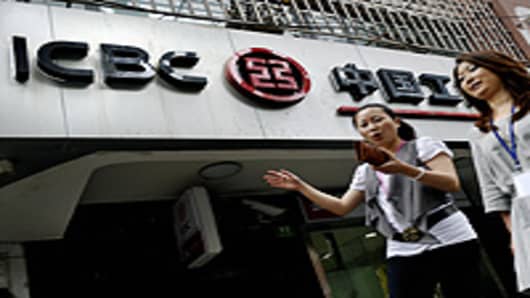 Philippe Lopez | AFP  Getty Images
Pedestrians walk past a branch of the Industrial and Commercial Bank of China (ICBC) in Shanghai.

Chinese banks, which were encouraged to go on a lending spree by the government to boost liquidity and spur growth in 2009, face the risk of rising non-performing loans, particularly in the real estate sector, as the economy slows.

“I don’t think we’re seeing a credit crisis anytime soon but clearly last year was a cyclical low for NPLs, so we expect NPLs to pick up this year, but at a manageable level,” May Yan, a banking analyst at Barclays Capital told CNBC.

The ratio of non-performing loans among mainland commercial banks, which stands at approximately 1 percent, could more than double by the end of 2013, according to Mike Werner Senior Equity Analyst, Chinese & Hong Kong Banks, at Sanford C. Bernstein.

“The slowdown in economic growth, coupled with the massive credit expansion at the banks in 2009 will lead to 2.5 to 3.5 percent NPLs in our models by the end of 2013,” Werner said.

“Those NPL formations tend to be a lagging indicator so that’s going to impact the banks over the next couple of quarters,” he added.

In their latest earnings reports, ICBC, China Construction Bank and Agricultural Bank of China all reported an increase in non-performing loans and provisions against loans likely to go bad.

Weak growth is also likely to weigh on demand for credit in 2012, Yan told CNBC.

“We expect the (negative) trend in loan growth to be a focal point (this year),” she said.

Yan downgraded her outlook for Chinese banks from overweight to neutral with a “negative bias” in late February.

Werner also sees a deceleration in loan growth this year as China’s central bank aims to reduce leverage in the banking system.

“The central bank will encourage banks to decelerate loan growth in order to reduce the loans outstanding-to-nominal GDP ratio for the country,” Werner said.

Lower demand for loans is also expected to hurt the banks’ net interest margin - the revenue generated from borrowers minus interest paid to depositors – which accounted for over 65 percent of the lenders’ earnings in 2010.

“In the fourth quarter, net interest margins have improved, but going forward into 2012 that will act as a headwind, especially in the second half of the year,” Werner said.

Werner adds that income from services fees, another key contributor to banks’ profit growth, is also set to slow this year.

“One of the main drivers for this decline (in fee income) is that the government has asked the banks to reduce the amount of fees they were charging for some of the small enterprises to help ease the environment for (them),” he said.