Like a marriage that no longer works, the euro zone should accept its fate, split up and get divorced, according to Roubini Global Economics. 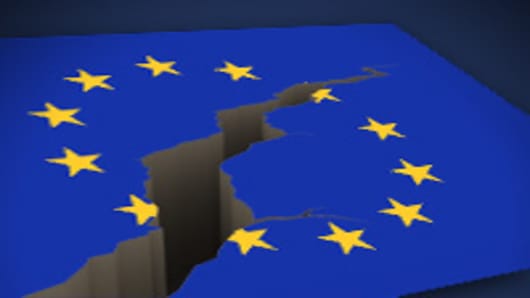 In the comment piece for the paper Das and Roubini – dubbed Dr Doom for his pessimistic economic predictions - suggest that problems remain for Greece and other euro zone countries including Portugal and Ireland.

Those countries might need further restructuring, they said, adding that the euro zone lacks the essential components needed for a successful monetary union.

The duo claim “splitting up may be hard to do but it’s better than sticking to a bad marriage”.

To deal with what they argue are fundamental design flaws of the euro zone, they propose a "divorce settlement" under which some countries - ideally Portugal, Ireland, Italy, Greece and Spain - leave the union and a core group of countries remains in the euro.

They suggest currency realignment to achieve this, but admit that there would be disruptions.

Nevertheless, an amicable exit strategy would be in everyone’s interest, Das and Roubini said.

The economists suggest the creation of a transitory monetary framework which would reverse the exchange rate mechanism that led to the euro, and new foreign exchange trading corridors would be widened in steps as inflation and exchange rate risk premia returned to normal.

They argue that inadequate foreign exchange reserves, currency losses and disorderly defaults would be mitigated by the ECB buying the new currencies of the smaller exiting countries at the floor of the trading band.

While the dismantling of the euro zone from its current form to a smaller band of countries has been mooted in the past, it is unclear how leaving the euro would work.

They concede that legal opinion would need to be sought to clarify the finer details.

They suggest that any imbalances in the payment systems would be dealt with by negotiation and netted between the ECB and national central banks.

The duo wrote that banks and financial markets pose the gravest risk to their proposed exit strategy but that "domestication" of external debt prior to exit would reduce credit losses and currency risk.

The claim often levied at those proposing an exit from the euro zone of the weaker economies has been that capital flight would take place on such a scale that banks could face collapse.

Roubini and Das agree that in some cases bank nationalization would be necessary, with curbs on deposit withdrawals and temporary capital controls.

Instead of enduring a bad marriage causing misery for all concerned, divorce laws help to achieve an amicable split and the euro zone should employ such a strategy for an orderly exit strategy “sooner rather than later because delaying often makes break up more costly” they said.