Known for their strong work ethic and no-nonsense attitude, the Dutch were close to losing their patience with troubled Greece earlier this year. 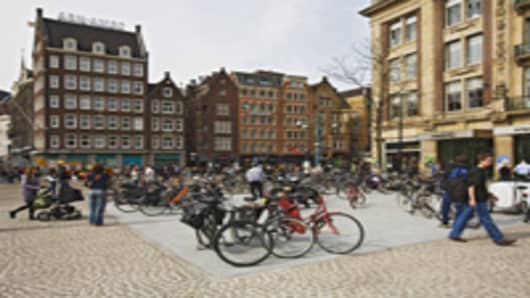 Netherlands Prime Minister Mark Rutte said the euro zone could handle a Greek exit, just months after he suggested that euro members that can’t get their budget deficit down to the European Union’s prescribed 3 percent limit must in the future be forced to leave the single currency.

Now the Netherlands finds itself in a tight spot.

The Dutch multi-party coalition government almost collapsed last week over budget cuts necessary to bring the country’s own budget deficit back to 3 percent from 4.7 percent in 2011.

The negotiations, which started almost a month ago, have pitted the ruling Christian-Democrat and Liberal parties against the anti-immigrant PVV, or “Party for Freedom,” led by populist politician Geert Wilders.

Prime Minister Rutte’s minority cabinet is supported by Wilders’ PVV, but their differences – Wilders is rumored to have demanded a referendum on the euro and huge cuts in development aid – are proving hard to reconcile. Rutte’s coalition needs the PVV’s support in parliament.

With the AAA-rated country now firmly among the euro zone’s budget sinners, the Netherlands needs to get its books in order fast if it wants to avoid being accused of the lack of fiscal discipline it has berated others for.

The country needs to identify extra savings of more than 9 billion euros ($12 billion) in order to bring its budget deficit back within the EU-imposed 3 percent boundary, under a plan that needs to be submitted to the European Commission by April 30 at the latest.

“The debate is centered on whether to save short term, or reform on a more long-term basis,” Maarten Leen, chief macro economist at ING, told CNBC.com.

“The measures will be a mix of significantly lower expenditure, higher taxes – possibly a hike in VAT – and more long-term reforms such as a cut in unemployment benefits,” Leen said.

In addition, there is talk of raising the retirement age, to 66 from the current 65, sooner than initially planned.

Wilders, like other populist lawmakers across Europe, has captured voters with a straight-talking anti-Islam and anti-EU stance at a time when many ordinary citizens are losing their jobs and being asked to sacrifice some of their benefits.

But what appears to be growing negative European sentiment must be seen in the context of domestic politics and anger at financial institutions – not the euro itself, according to analysts.

A report by eurosceptic think tank Lombard Street published last month and commissioned by Wilders’ PVV looked at the advantages and disadvantages of euro membership and concluded that the Netherlands has suffered a significant shortfall in growth compared with non-euro countries.

Dr.Ben Crum, associate professor in political theory at Amsterdam’s VU University, told CNBC that the report has been dismissed in the Netherlands as predicable, and mainly reinforced economists’ views that a euro departure would be a mistake.

“In practice, it is not feasible,” Leen said of a Dutch exit from the euro zone. “It is easy to say, in hindsight, that we should not have joined.”

ING’s chief economist Mark Cliffe already warned in December that that the collapse of the euro would have a particularly disastrous effect on the Netherlands.

“In the past 20 years, virtually no other country has profited as much from the euro and the European internal market. In 2010, the Netherlands exported 244 billion euros to the rest of the euro zone – virtually half of our GDP. The collapse of the euro would therefore have a disastrous effect on Dutch business and the economy,” Cliffe wrote in an open letter to Dutch newspaper De Volkskrant.

“Of all the euro zone countries, the Netherlands has the greatest interest in saving the euro. However expensive it is to keep the weaker countries afloat, the collapse of the euro zone would be far more costly,” he concluded.

Crum noted that while Wilders has fueled negative sentiment toward the EU, anti-Brussels calls are not just the result of Wilders’ efforts.

He cites the 2005 EU referendum in which Holland rejected a proposed EU constitution as a key moment. That constitution was replaced by the Lisbon Treaty after France also rejected it in a referendum.

Crum acknowledged that “Europe is a sensitive issue” and said politicians were aware that support for EU offers little hope of electoral gains in times of austerity.

“Toward the end of the 90s, the Netherlands was a loyal ally focused on integration. That image has slowly crumbled,” Crum told CNBC.

By reputation, the Dutch should find it easy to be frugal in hard times. But faced with ever-growing challenges including immigration, rising welfare costs and struggling euro zone partners, the hunt for savings continues.