Zafran: In Defense of Gordon Gekko

But is it really THAT cut and dry?

Do all corporate raiders ruthlessly shut down factories, lay off workers, and invoke policies that lead to permanent economic damage to many innocent by-standers? After all, aren’t there big time investors like Warren Buffettwho will happily buy a business and further lend both capital and strategic insight in order to grow the business, thereby adding jobs and stimulating the economy? 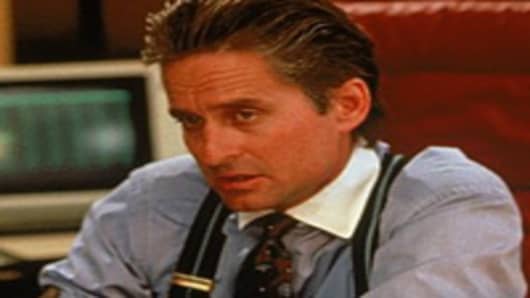 Corporate raiders may not be as villainous as you might think. If all companies were managed efficiently and profitably, there would be no opportunities for a “Wall Street” Gordon Gekko to exploit in the name of greed and short-term profits.

To be clear, we live in a capitalist society. The way in which we maximize the creation of wealth for all of our citizens is to ensure that there is an optimized use of capital. In other words, business owners and operators are always aiming to optimize their use of labor and resources to maximize the long-term profitability of their companies. These profits increase all workers’ and owners’ incomes and enable them to consume other products and services. These profits also trigger a larger dollar amount of taxes to be paid to the government, enabling it to deliver needed social services. In short, maximizing long-term profits creates a virtuous circle of job creation, income growth, taxes paid, consumer spending, and additional profits to keep the cycle flowing.

But what if a company’s management team is not focused on optimizing a company’s long-term profitability? Maybe the CEO and Board members have generous compensation packages and feel no need to take well-calculated steps that would enhance the company’s profitability. Maybe they have luxurious travel and expense budgets which they enjoy using at their disposal. Maybe they simply lack the vision and courage needed to transition the company to another strategic platform before a competitive product, service or technology materially impairs the company’s business model.

Enter the activist investor, the person who has the courage, capital and charisma to push needed changes within a poor-performing company. Let’s face it: a corporate raider is only able to identify and act upon a situation when a business is poorly run and poorly capitalized. Indeed, the raider doesn’t create the inefficiencies. Quite the opposite. The raider takes the first steps towards correcting the inefficiencies and getting the company back on its feet before it’s too late.

Skeptics might argue that the corporate raider is seeking nothing more than to line his own pocketbook. Yes, there’s absolutely an element of truth to this assertion. The raider isn’t going to spend his time, and take risks with his own money, for no return on his investment.

What’s missed, however, in the skeptics’ derision is that the blame should be directed elsewhere. Firstly, skeptics fail to critically assess the management team’s ineptitude that led the company to its vulnerable strategic position. Moreover, what about assigning some blame to the Board of Directors? A key responsibility for Board members is to review and assess the performance of a company’s CEO and the management team. If a corporate raider is knocking on a company’s doorstep, long ago the Board should have recognized that the management team was not properly executing its directive and should have taken an appropriate set of action steps.

Skeptics might further assert that a corporate raider just simply doesn’t give a damn about humanity. It’s shameful to make profits and personal stock gains when thousands of workers could be laid off, thereby harming their families and the greater community. Indeed, an activist investor may well destroy the lives of life-long loyal employees whose blood, sweat and tears is embedded in the corporate culture. How can moving jobs abroad to save 25% off a company’s wages be “American?”

Sadly enough, in a poorly run company, the workers are ultimately “at risk” anyway. If a company cannot maintain its competitive advantage, pretty soon sales will swoon, profits will turn into losses, and job cuts will be forthcoming. Isn’t it better to have a corporate raider proactively identify strategic misdirection and make the needed changes before even more jobs are lost? As Thomas Friedman’s “The World is Flat” made clear, there are plenty of capable individuals in countries other than the U.S. who can execute the same tasks as us while earning meaningfully lower wages. A corporate raider is merely expediting the inevitable, and hopefully mitigating the total damage that will be felt by all of those involved.

Let’s not also forget that we live in a free society. Why shouldn’t corporate raiders have the right and ability to accumulate an ownership position in a public company’s shares? Why should they be treated differently than me and you? As owners of the enterprise, the shareholders can accept or decline any formal offer that a corporate raider may ultimately make if he/she wishes to buy the entire company.

You see, it’s really no different than the investment choices you face each day: Are you buying a stock on margin for a quick trade, just like a leveraged buyout fund that uses ample amounts of leverage to finance the purchase and looks for quick results? Or are you buying a beaten-down stock as a long-term investment and even willing to dollar-cost-average if the opportunity arises to add to the investment, just like a value-oriented private equity firm or Warren Buffett might do?

In truth, we live in a society where we aspire to attain wealth and financial independence. How else can you explain the recent mania surrounding the $656 Mega Millions lottery? A corporate raider is nothing more than an entrepreneur who is trying to take an inefficient company to a higher valuation, and to earn whatever financial benefit the markets will accrue him in doing so. Ironically, to deny him his free pursuit of this profit would be Un-American!

In short, big time investors force needed change in uncompetitive businesses, oftentimes creating near-term economic and social disruption in order to avoid larger-scale and permanent economic and social wreckage. Rather than blame the raider, let’s lay blame for the painful steps felt along the way where they are due: inept management teams and lazy or co-opted Board members.

Watch the debate over activist investors all day on CNBC – Wednesday, April 11th .

A Partner of Luminous Capital, Alan Zafran has served as a financial adviser to wealthy families and institutional investors for the past 20 years. He began his career at Goldman Sachs in 1990 in the Private Client Group. After seven years at Goldman Sachs , Alan and his entire team joined Merrill Lynch in 1997. At Merrill Lynch , Alan helped to build the Private Banking and Investment Group. In May 2008, Alan and his partners launched Luminous Capital. Alan’s experiences include facilitating the execution of credit default swaps on subprime residential mortgages in 2006 and 2007 before the market crashed as chronicled in the book, “The Greatest Trade Ever.”