Facebook’s IPO: What We Know Now

Facebook raised the roof off Wall Street — in more ways than one as it turned out — with its initial public offering, which had a target valuation on the social-media giant as high as $104 billion. 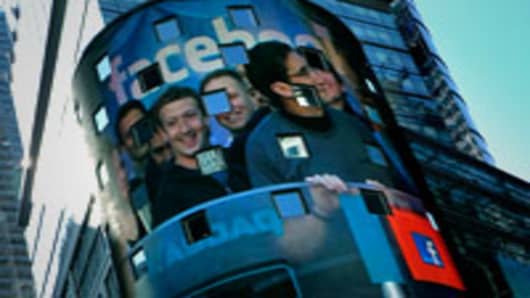 To see where Facebook’s IPO stands now, here are some questions and answers, with updates as they happen.

When did the IPO take place?

The price actually opened at $42.05 a share after investors immediately jumped in with the ceremonial 100 share lot.

Some 82 million shares were traded in the first 30 seconds. Seven minutes after the opening, 110 million shares had traded, with the stock eventually reaching a high of $45 a share. By 3:30 pm EDT Friday, Facebook volume — shares traded — set the record by exceeding General Motors' 458 million shares on its first day of trading.

As trading went back and forth, so did the price. Less than 20 minutes after the opening, prices fell below $39. It did reach a high of $45 a share.

The total volume of 573,622,571 was 21.4 percent of the Nasdaq composite. It was certainly the most active stock on the Nasdaq exchange.

One note worth mentioning: Stocks closed at lows on Friday, with all three major averages posting their worst weekly drop so far this year.

As mentioned above, the sale was supposed to start at 11 a.m. EDT — but Nasdaq, the exchange selling the stock — had problems delivering what's called the opening print, and traders were having difficulty canceling and/or changing orders before the stock sale began. Nasdaq says it will look into what happened.

And late word Friday has the Securities and Exchange Commission set to look into what happened.

The sheer volume of the IPO shares was said to be the reason for the delay. Orders for trades started before 11 a.m. EDT. Quoting for the stock began at 10:45 a.m. EDT.

Expected to raise some $16 billion, it's the largest Internet IPO in the U.S. and the third largest IPO ever — behindVisain 2008 and Italian utility firm Enel SPA in 1999.

Twenty-eight-year-old CEO Mark Zuckerberg rang the Nasdaq opening bellremotely from Facebook's Menlo Park, Calif., headquarters on Friday. He's got a lot to ring in: His reported take from the IPO is said to be some $19.1 billion.

To get investors interested, Facebook's roadshowbegan on May 7 at Morgan Stanley to some 'mixed reviews.'

But Facebook changed its pitch: A 30-minute video was scrapped and the company took more questions from analysts and potential investors. That was a big complaint during the New York City presentation — not enough time for the Q&A.

But reports say the newer presentation went over much better. The roadshow drew crowds of investors from coast to coast.

Facebook closed the books on its IPO on May 15, two days ahead of schedule, in a signal that the landmark initial share sale was drumming up strong demand.

Some dates mentioned for the IPO were in late May or early June. The reason there could have been delays for the IPO was because of Facebook’s $1 billion acquisition of Instagramand its deal with Microsoft.

The Securities and Exchange Commission has to okay the Instagram buy — as well as the Microsoft patent deal — and while both are expected to be approved, there could be some unforeseen complications.

Facebook is still waiting for the official SEC okay, but people close to the matter said the company wanted to get on with marketing the IPO.

The Federal Trade Commission reportedly has launched an investigation into the deal, collecting information from at least one of the social network’s largest competitors. The process could also further slow Facebook’s already lagging mobile strategy.

This type of probe — called a competition probe — is routine for any deal more than $66 million. It's likely to take six to 12 months. For its part, Facebook said in its IPO documents last month that it expected the deal to close in the second quarter.

For the record, Facebook filed for its IPO on Feb. 1, 2012. The company sent an amended IPO filing to the SEC on May 3. As noted above, the ticker symbol is “FB.”

Many analysts believe the move to buy Instagram was simply to increase the IPO value of Facebook.

The deal may have been the sole brainchild of CEO Mark Zuckerberg, according to some reports.He reportedly informed the Facebook board of directors of the deal after he concluded the negotiations. The board's approval of the deal was described as largely "symbolic," the report said.

Instagram is a free photo-sharing program launched in 2010, which allows users to take a photo, apply a digital filter to it, and then share it on a variety of social networking services.

Why did Facebook make a deal with Microsoft on patents?

Facebook is buying a portion of patents from Microsoft for $550 million in cash — patents that Microsoft recently acquired from AOL.

This was mostly a preemptive move, rather than an attempt to create even more IPO value. Silicon Valley patent wars are heating up and Facebook wants to protect itself against some potentially very pricey litigation after the IPO. Along with the Instagram deal, the SEC has to look into this move as well.

Closing of the offering is expected to occur on May 22, 2012, subject to customary closing conditions. In addition, Facebook and the selling stockholders have granted the underwriters a 30-day option to purchase up to 63,185,042 additional shares of Class A common stock. 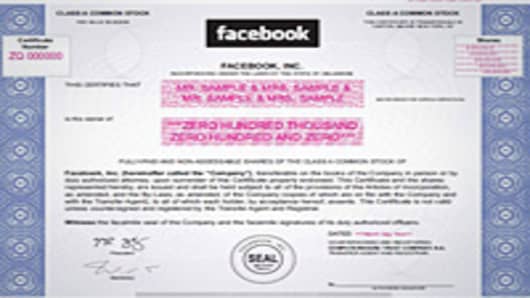 The image you see here is what the Facebook stock certificate looked like. But after first saying it would issue them, Facebook changed its mind on Friday and will not issue paper certificates after all.

Ownership will be recorded electronically in the Direct Registration System (DRS) instead. (Most companies have stopped issuing certificates.)

Facebook said it planned to raise as much as $16 billion from the IPO.

Facebook has chosen the Nasdaqover the New York Stock Exchange. The NYSE is widely seen as the home of the traditional “blue chip” company, while the Nasdaq’s reputation is more associated with Silicon Valley — and more to Facebook’s image.

When can investors buy?

Some 31 banks are advised on the deal, but the main players are Morgan Stanley, JPMorgan Chase, Goldman Sachs, Bank of America, Barclays,and Allen & Co.

How much money is Facebook expected to raise with the IPO?

A new filing by Facebook said it expects to raise somewhere close to $16 billion. That would make it the largest Internet-related IPO on record — breaking the previous record held by Infineon Technologies (Germany), which raised $5.9 billion in March 2000.

When did investors jump in to buy Facebook stock?

The moment the stock debuted on the Nasdaq, but as noted before, there was plenty of movement on the stock before the 11 a.m. EDT scheduled opening.

Many market experts say that the problem with immediately jumping into an IPO is that insiders, such as hedge fund managers, are buying up shares that push up the price.

Normal traders are advised to wait for a couple of days for the stock price to settle back down.

The GM IPO of two years ago is cited as a recent example of seeing a stock price initially go up $6 or $7 higher than the IPO the first day, and then settle back down a day or two later.

Here's a quick look at a couple of recent IPOs and how their stocks have fared:

It's big and profitable, but even it can have some setbacks.In an updated filing of the IPO, Facebook said growth in the number of users using Facebook on mobile devices, which is hard to monetize, "may negatively affect our revenue and financial results."

Facebook generated $1.06 billion in revenue during the first quarter of 2012, according to an updated filing for the social network's IPO. (The updated filing is part of the IPO process when a company goes public.) That $1 billion is up from $731 million a year earlier.

A "negative" for Facebook from the filling shows that while revenue was up 45 percent from 2011, it was down 6 percent quarter-over-quarter and was still weak compared to analysts' estimates of $1.3 billion.

This is the first time in at least three years that Facebook’s revenue is lower versus prior quarter, but it's obviously still a lot of money to make.

The eight-year-old firm has more than 901 million members, and nearly half a billion people around the world log into Facebook every day, according to the latest statistics. More Fortune 500 companies also have corporate Facebook pages, rather than Twitter aliases, according to Facebook.

Who are the big financial winners from the IPO?

Facebook is only getting about half— or $5.6 billion — of the roughly $10.6 billion it plans to raise. The other half is going to a some inside investors. Chief among them are co-founder and Chief Executive Mark Zuckerberg, venture firm Accel Partners, early investor and PayPal co-founder Peter Thiel, Russian tycoon Yuri Milner's DST, and investment bank Goldman Sachs.

The company falls under the guidelines of the SEC.It's already doing so by applying for an IPO as financial filings such as the one mentioned above, have to take place.

After the IPO has taken place, Facebook will have to follow disclosure rules, including holdings and transactions of insiders or the officers and directors of the company. It will have to disclose its financial status on a regular basis and come under surveillance by the SEC on its trading practices. Of course, it will have to hold shareholder meetings.

CORRECTION: An earlier version of this story incorrectly referred to Eastern Standard Time (EST), when it should have said Eastern Daylight Time (EDT).