The British government is considering plans to shut down the department responsible for delivering the Olympic Games just weeks after the closing ceremony has taken place, as part of its austerity drive, sources close to the government have told CNBC.com. 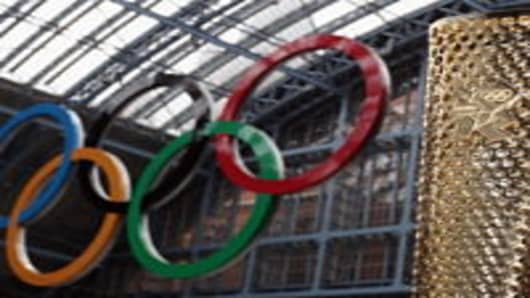 Getty Images
A detailed view of the prototype design of the new golden Olympic torch during its unveiling at St Pancras Station on June 8, 2011 in London, England. 8,000 torchbearers will carry the Olympic Flame around the UK during the 70-day relay, which starts at Land's End in Cornwall on May 19, 2012.

Westminster sources have told CNBC.com that the Department for Culture, Media and Sport (DCMS) might be closed in the fall once the Olympics have been successfully delivered.

A spokesman for DCMS refused to comment on speculation about its future, saying “It’s a matter for Downing Street.”

But a source close to Harriet Harman MP, the Opposition Labour party's spokesperson for Culture Media and Sport told CNBC.com: "There are real concerns at very senior levels among Westminster and the arts community that [the closure of DCMS] is going to happen. DCMS has cut its budget so much there is a definite signal that it is not an important or necessary department after the Olympics."

While the government has committed to delivering a “safe and successful Olympics when the eyes of the world will be on the UK” those responsible for achieving such aims could find themselves being transferred to other government departments shortly after or face redundancy.

One source told CNBC.com there had been rumblings about what would happen to DCMS after the Olympics for several months.

“There has been a strong suspicion for some time the government would try to dismantle DCMS after the Olympics. BIS has been chopped and changed most of all the departments in recent years. I’ve lost count of the number of changes it has gone through,” said the source.

The new department, which will be created during what is expected to be a major Cabinet reshuffle in the Fall, would be led by Conservative MP Ed Vaizey, the current minister for the Arts at DCMS who has spent the last six months on what can best be described as a charm offensive within the arts world, according to sources.

His current boss, the secretary of State for Culture, Media and Sport, Jeremy Hunt, seen as a rising star within the Conservative party, has long been seen as the favorite to replace the Health Secretary Andrew Lansley. Hunt is seen as being capable of putting a fairer face on the Coalition’s controversial reforms of the National Health Service than Lansley has been capable of.

The Treasury is understood to believe that closing DCMS could lead to savings of up to 1.6 billion pounds ($2.6 billion) per year in public spending, based on the DCMS’s own estimates of planned spending for the financial year 2011/12.

That money could potentially go some way to enable the chancellor of the exchequer to provide a tax giveaway ahead of the next general election in 2015, but it would mean the UK’s 4.6 billion pound film industry, sport, art and heritage and museums could be left to fend for themselves.

According to the think tank, The Institute for Economic Affairs (IEA), such a tax giveaway could take one of several different forms.

The money saved could go 50 percent of the way to allowing the government to introduce a married couples’ tax break, the total cost of doing this in any given tax year being £3.2 billion ($5.1 billion).

Alternatively, the money saved would allow the Chancellor of the Exchequer to reduce Corporation Tax by a further 2 percent at a cost of 1.6 billion pounds ($2.5 billion), while a cut in Fuel Duty of 3 pence per liter would cost 1.5 billion pounds ($2.4 billion).

The IEA also suggested the money saved could go some way to enabling the government to change inheritance tax thresholds which would cost the Treasury 2.7 billion pounds. Asked which was the most likely tax break that the government would go for if DCMS was shut down, the IEA suggested a tax break for married couples.

The government has a long standing commitment to introduce a tax break for married couples by 2015. Reforms to child benefit, in which couples where one person has an income of over £50,000 ($80,000) will have their child benefit entitlement reduced come into effect in the same year, with the result that the government would be under pressure to deliver the married couples tax break before the next general election also in 2015.

“You have to go back to the heart of the Cameron project. He didn’t expect to become prime minister in the middle of an economic crisis," Ruth Porter, communications director at the IEA, told CNBC.com

"He wanted to be a social reforming prime minister in the same way that Ian Duncan Smith wanted to be not the economic prime minister that he is. That’s why he let Steve Hilton get away with the Big Society project even though it didn’t play well on the doorstep,” Porter added.

Closing DCMS would leave more room for the philanthropic, voluntary and private sectors to get more involved in the arts and sport, according to the IEA. Such a move would be in line with the government’s “Big Society” agenda, a central plan of Conservative party policy ideologically similar to the Republican party’s belief in smaller government.

However, the recent controversy over the closure of tax loopholes, announced in the Budget last month, related to charitable giving would suggest an unintended consequence of closing DCMS and the tax avoidance measure together would lead the wealthy to feel less inclined to give to charitable organizations - which could be financially perilous for heritage and arts groups in particular.